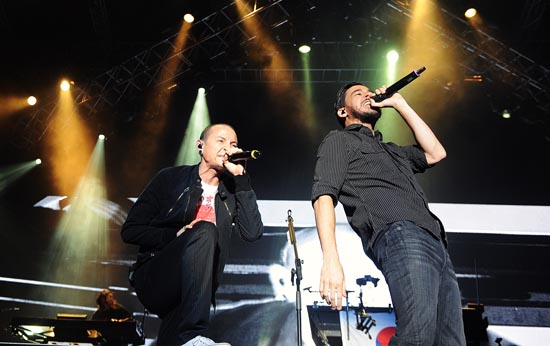 Linkin Park stirs passions at Olympic Park in Seoul on Sept. 8 during the group’s third visit to Korea. Provided by Access Entertainment


Linkin Park appeared fashionably late for their third appearance in Korea on Sept. 8, but the restless crowd was quickly mollified when turntablist Joe Hahn - a second-generation Korean - strode on stage and tagged Korea’s taegukgi, or national flag.

The 45-minute delay had threatened to turn the mood of the masses stormy after warm-up bands Galaxy Express and Yellow Monsters, both Korean, had got the adrenalin pumping at Olympic Park’s Gymnastics Arena.

But two hours of intense rock and rap, ranging from classic hits to songs from Linkin Park’s fourth and latest studio album, “A Thousand Suns,” more than compensated for the delay. At times, the crowd was so hyped and the energy levels were so high that it created the illusion of a packed stadium despite the swathes of empty seats.

The band launched into the night’s repertoire with “The Requiem,” a chilling number and the first song on “A Thousand Suns.” This led to the explosive, chaotic and electrifying “Faint,” which implored spectators to shake off any surviving lethargy and rock out.

Other hits followed, such as “Lying From You,” “Given Up” and “What I’ve Done.” The audience also got plenty of opportunities to become acquainted with the band’s latest album.

In front of the stage, the band set up three tables so that lead singer Chester Bennington and rapper Mike Shinoda could wade into the crowd and interact with fans - which was much appreciated by those further back in the stadium.

Meanwhile, Korean-American Hahn got stuck into his DJ set, treating the audience to the familiar opening sequence of “Numb” and almost causing a riot as excited fans jumped around on their seats.

Some of the more boisterous members of the de facto mosh pit attempted to crowd surf their way to the stage but invariably failed, and Bennington seemed to appreciate their enthusiasm by pointing in their direction and giving them a nod.

As the set wrapped up, the band played “Iridescent,” the title song of “Transformers 3” and also a hit single from its latest album. This slowed the mood, but still had the audience singing along entranced.