SOPA, so good for kids with stars in their eyes

SOPA, so good for kids with stars in their eyes 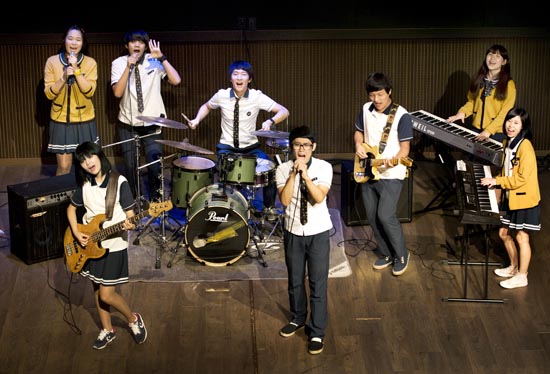 The School of Performing Arts Seoul aims to turn high school students’ dreams of becoming famous K-pop singers into a reality. The school’s practice-oriented curriculum teaches them how to prepare for auditions and how to develop their musical and performing skills. By Park Sang-moon


The School of Performing Arts Seoul, a private high school tasked with pumping out future K-pop and Korean Wave stars, bridges the gap between reality and fiction. It also shows how Korea’s traditionally conservative society is changing - perhaps for the better.

“There are kids who can’t figure out what they want to do with their lives, even in college, and there are those who just opt for the highest-ranking college their grades and test scores allow. But students here are different,” said Kim Yoo-rim, one of SOPA’s music teachers.

“We know this because many of them have had conflicts with their parents, but have ended up convincing their folks to let them come here and study.”

In contrast, TV soaps like KBS’ “Dream High” paint a picture that most kids would be hard pressed to identify with. In it, students, played by real life K-pop stars Taecyeon (of the band 2PM), Suzy (Miss A) and Eun-jeong (T-ara), get to dye their hair, pierce their ears and talk of their dreams of hitting the big time.

The drama - more of an escapist fantasy for the vast majority of young viewers - is set at a performing arts high school and focuses on a motley crew of aspiring singers who yearn to become teen sensations.

But with the establishment of SOPA, the drama’s real-life counterpart, three years ago, as well as the exploding global awareness of K-pop, more parents are opening up to the idea of letting their offspring throw their hats in the show-business ring. 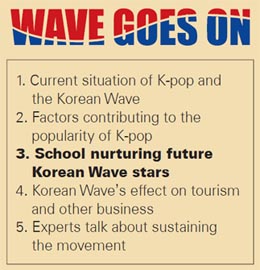 SOPA is Korea’s first high school dedicated to modern and applied arts. Located in Guro-dong, in western Seoul, it differentiates itself from existing arts high schools by concentrating on applied music - vocals and bands - instead of classical instruments, and modern instead of traditional dance.

School principle Park Jae-ryun’s background as a teacher and thespian helped make this ambitious idea, or transition, possible. Three years ago, the school changed its name from Eun-il Industrial High School and embarked on a new journey that has already seen positive results: over a dozen K-pop musicians have passed through its halls.

FTIsland’s Jae-jin, Min-hwan and Seung-hyun, as well as CNBLUE’s Jong-hyun, are among its early graduates. At present, the most famous members of its student body are Suzy of Miss A and Sulli of f(X).

Girl’s Day, A Pink, Rania, B1A4, Boyfriend, X5, Leaders, Red Apple and BGH are also on the list of alumni, while another 100-plus students have signed with agents and are awaiting their time in the limelight.

SOPA students study core subjects like math, English and Korean literature, in accordance with Korean law, but a stronger focus is placed on their majors.

“As many of them plan on entering the entertainment field as soon as they graduate, they tend to focus more on practicing [their major],” said Kim.

Students learn how to perform live on stage and are taught the technical art of recording music. Listening, basic vocal skills and music theory are other core courses for music majors. They get further prepared for life in showbiz with classes ranging from auditioning to performing.

The program is proving a roaring success and looks set to build on its achievements.

During the first edition of the show “MBC Star Audition” last year, two students made it into the top 20. Meanwhile, We Make Art (WMA) was one of only two high-school bands to make the last 24 teams on the KBS show “Top Band.” Additionally, singer-songwriter Junie, another SOPA student, topped a Japanese audition show for female singers called “Niji-Iro Supernova,” as she set her heart on continuing K-pop’s invasion of Korea’s neighbor to the east.

Each student seems to have a different story to tell. Sekizawa Jiharu, a sophomore, has a Japanese father and a Korean mother. She sees music as a bridge between the two cultures. “I want to work in the field of Korean-Japanese relations. I think that, through popular culture and cultural exchange, the two societies can approach each other with less hostility,” she said. 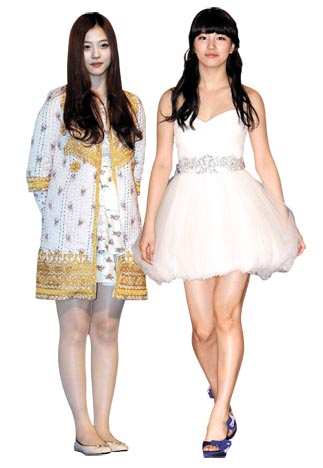 Sulli from f(x), left, and Suzy from Miss A are two of SOPA’s most famous students. [JoongAng Ilbo]

At the school, hallways flanked by practice rooms of all sizes are filled with groups of students singing, banging drums, strumming guitars and - uniformly - dreaming of seeing their pictures in the papers.

Heads gather together, and occasionally bob up and down in synch with the beats; eyes are glazed, solemn expressions mask their insecurities.

The school also holds regular concerts, but only students with the best grades are allowed to perform. Industry scouts come and watch, as do staff from TV shows, giving the students priceless exposure.

When the list of names was announced for the most recent concert, the teacher’s office was packed with students - some ecstatic, and some understandably dejected.

One boy sat next to a music teacher’s desk, his head hung low. He slowly worked up the courage to ask what the standards for selection were.

A few minutes later, a group of three girls turned up. There were a few frowns and, presumably, a few dashed hopes. “I don’t know why [so-and-so] got in,” muttered one girl under her breath.

Clearly, while the school offers kids a leg up onto the ladder, it can’t guarantee they will make it all the way to the top.

“Not everyone will become stars, and not everyone will succeed,” said Kwon Oh-hyun, vice principal at SOPA. “That is why, through counseling, we check and reaffirm the student’s personal goals and help them search for [the most suitable] future careers.”

But if the students don’t believe in themselves no one else will - at least according to one young lady.

“I believe there is a right time for each of us,” said the 19-year-old student with stars in her eyes, who gave her name only as H.

“I believe my time will come, when I am totally prepared for it.”

H said she was a trainee at a well-known agency that has forbidden her from talking to the media before she makes her debut.

Meanwhile, elsewhere in the school, students hoping to become actors or theater technicians were busy preparing end-of-semester productions. From checking the audio-visual equipment to handing out promotional leaflets and acting on stage, they got to experience all aspects of the production process.

You don’t know their names yet, but - if the teachers do their jobs properly - they could be involved in a tangled love triangle on a TV near you soon.