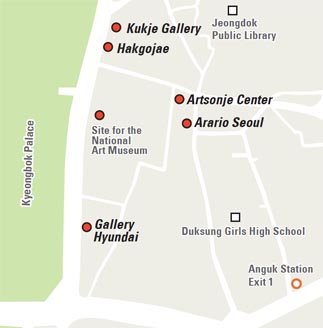 With the heat of summer finally giving way to cool autumn breezes, the galleries in the art district east of Gyeongbok Palace have launched new exhibitions.

Spend a day strolling through these storied streets, and then pop into one of the many inviting cafes or restaurants in nearby Samcheong-dong for refreshments before heading back out for another round of gallery hopping. 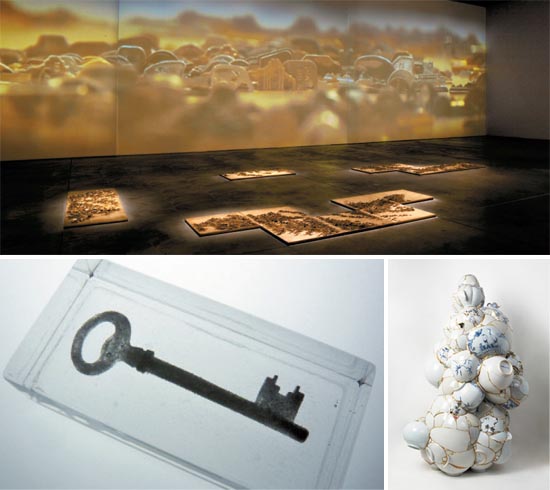 At first glance, the four artists in the group exhibition “Epic of Units” at Gallery Hyundai would seem to have little in common except for the fact that they are all Asian women. But their use of repetition to convey meaning is the through line that connects them.

Probably the most well-known is Japanese artist Yayoi Kusama, 82, renowned for her obsession with and fear of dots, qualities she has sublimated into her art.

There are two Korean artists in the show, including Yeesookyung, 48, known for sculptures with abandoned fragments of ceramics attached by a gold leaf and epoxy mixture. The other is Korean-American Jean Shin, 41, who makes monumental installations with found objects such as keys or prescription drug bottles. Her installation was created with more than 8,000 old copper keys collected from Arizona residents, to form what look like sand dunes in the desert. The piece is paired with a massive video projection that magnifies parts of the installation, though the effect is more like ocean waves.

“Viewers tend to project things that are familiar to them into artworks, and my work is open to various interpretations,” said Shin, who is in Seoul for the show.

The final artist is Japan’s Aiko Miyanaga, 37. She makes objects that are seen in everyday life - a key, a watch - but which can be read as symbols.

“They evaporate sometimes quickly and sometimes very slowly, as I intend,” said the artist, who is also in town for the exhibition.

Joo Henna, deputy director of gallery Hyundai, described the artists’ works as a departure from postmodern works focusing on spectacles. Instead, these are delicate works infused with emotion and related to healing.

“Their works, whether formed from units of behavior, of material, or of thought, create new meanings through constant repetition,” Joo said. 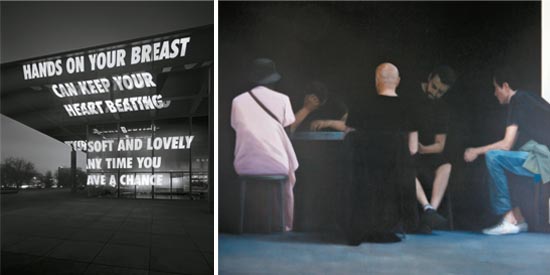 Left: “HANDS ON” (2011) by Jenny Holzer is pigment print of her light projection work. Provided by Kukje Gallery
Right: “Five Men Around a Table” (2011) by Tim Eitel Provided by Hakgojae


Kukje Gallery
Woman of words puts the writing on the wall

Jenny Holzer, a renowned conceptual artist and a pioneer in the use of text in contemporary art, is holding her second solo show in Korea.

Her exhibit at Kukje Gallery includes two LED signs arranged into sculptures, eight marble footstools, on each of which a sentence is inscribed, and 13 black-and-white prints showing sentences projected onto buildings.

Whereas many artists have used letters and type as patterns in their paintings, Holzer makes art of text and its meaning. She made a name for herself with provocative, often witty, statements projected onto a gigantic billboard in Times Square in 1982.

She became the first female artist to represent the United States at the 1990 Venice Biennale, and was awarded the Leone D’Oro that year.

She used to write all the texts herself. But since 1993, she has mainly been working with texts written by others, including famous authors. Her works are placed or projected onto various surfaces ranging from electric signs to stone benches.

“While language has always functioned as Holzer’s primary medium, it cannot be dissociated from the ingenious and sly choice of the surface that holds the text,” Kukje Gallery said in a press release. “From posters, bronze plaques and marble benches to electronic signs and light projections, her work questions how modes of mass address form publics and communities.”

In recent years, she has begun projecting statements and aphorisms onto buildings in Rome, Berlin, London and other historic world capitals.

Hakgojae
Paintings infused with loss and a hint of mystery

Amid the recent flood of flamboyant Pop Art prints, new media works and installations, Tim Eitel’s calm paintings with realistic figures and simplified details project a distinctive atmosphere. Sixteen paintings by the 40-year-old German artist are now on display at Hakgojae, as part of his first solo show in Asia titled “The Placeholders.”

All the paintings depict scenes that are common in daily life. But because of details and backgrounds that have been intentionally omitted or simplified by the artist, the images remain ambiguous and sometimes even mysterious.

“Rather than tell a certain story, I’d like to let viewers project their own experiences and memories onto the paintings and make various interpretations,” Eitel told reporters at a press preview at the gallery late last month.

The paintings in this show are either very large, at more than 2 meters, or very small, at around 20 centimeters.

“The small paintings are for more intimate contact with viewers and the large ones are to extend the space so that viewers can feel like they are part of the paintings,” the artist explained.

Several of the paintings depict homeless people or their traces, such as an empty cot on the street that the artist saw in Los Angeles in 2005, conveying a deep sense of loss, isolation and loneliness.

Eitel is a member of the New Leipzig School, a group of relatively young artists based in the former East Germany, though he was born in the former West Germany. The artists mainly make figurative paintings with a combination of realist and symbolist styles. 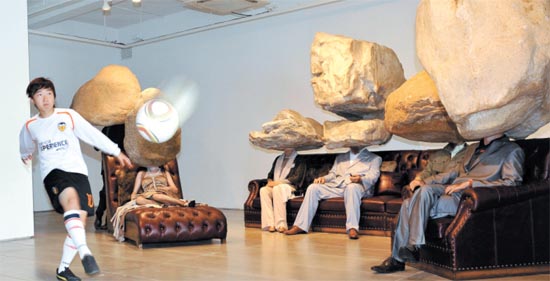 It’s a strange sight to see in a gallery window, but the current installation at Arario Seoul will bring you to a dead stop as you stand outside staring in. Through the large plate glass window, a boy kicks a football around as if out on the pitch instead of inside an art institution. Go inside and the scene is even more strange. Seated on a group of leather sofas and chairs is a group of well-dressed adults whose heads have been replaced by huge misshapen stones. Of course, these are sculptures but their hyperrealistic appearance gives off a very uncanny feeling. Meanwhile, the boy (who is a real person) continues to play with the football, sometimes kicking it into the window, oblivious to the visitors around him.

“Don’t worry, this is antishock glass,” Ryu Jung-hwa, Arario’s curator, told reporters at a recent press event. The work, titled “Teenager Teenager,” is by Chinese artists Sun Yuan and Peng Yu, who are also a couple.

“The adults have fossilized heads and look indifferently at the teenager,” said Gu Zenqing, curator of Beijing’s Li-Space, who came to Seoul to curate this exhibition. “But the work is open to various interpretations.”

Their heads are so big “to reinforce the strangeness,” Sun, who is here with Peng, said. “We wanted to make them even bigger. But the galley space was limited.”

Arario said in a press release that the piece was created to “confront the influx of commercial culture, while offering rare insight into individual freedom.”

Artsonje Center
Drawings for deciphering an artist and his work 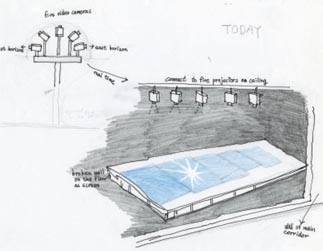 The drawing for “Today” (circa 2000) is part of the “Yiso Bahc - Lines of Flight” show. Provided by Artsonje Center

The “Yiso Bahc - Lines of Flight” exhibition going on at Artsonje Center helps viewers decipher the art of Bahc (1957-2004), one of the most important Korean conceptual artists of the 1990s. The show features 230 drawings, including concept sketches and installation portfolios.

One of the most impressive works here is a drawing for “We Are Happy” (2004), a billboard with the words in Korean printed in white letters against a pale orange background. The sign was completed on the basis of this drawing and other blueprints by Bahc after his sudden death from a heart attack. It was then shown at the 2004 Busan Biennale.

With its upbeat message and bright colors, there is something ironic about the billboard, which itself reads like propaganda.

“Yiso Bahc ceaselessly recorded his ideas in notes and drawings,” the museum said in a press release. “For him, drawing was yet another tool for materializing and developing his conceptual attitude and creative domain.”

According to the museum, the drawings in the exhibition can be categorized into three types: drawings on the themes of identity, ego, multiculturalism and social issues; drawing concepts that concretely represent the conceptual side of his installations; and an installation portfolio that Bahc repeatedly modified for production and installation of his works.