Teen named to champion Dokdo cause, save sea lions

Teen named to champion Dokdo cause, save sea lions 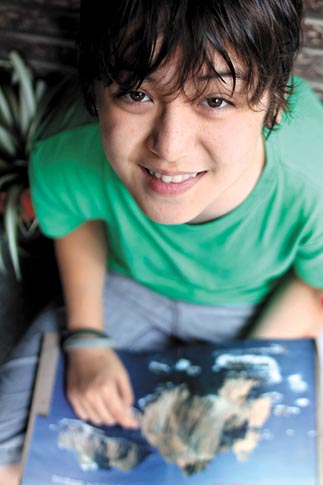 Korea has named a 14-year-old boy as its honorary ambassador for the Dokdo islets and Ulleung Island.

The provincial government in North Gyeongsang said it appointed Korean-American environmentalist Jonathan Lee on Wednesday to advocate for Korea’s sovereignty over Dokdo and create more interest in curbing pollution in the area.

In the last four days, Lee has participated in several environmental events that were hosted by the government and also helped in producing promotional materials for the islands.

Lee visited Daegu on Wednesday and met provincial governor Kim Kwan-yong, expressing his enthusiasm for protecting the natural environment near Dokdo and Ulleung Island. Lee said he was pleased at being tasked with the job because it gives him a chance to help protect the endangered sea lions there.

“Jonathan was very concerned by the threat of extinction facing the sea lions near Dokdo,” said Lee’s father, Kyung-tae. “He said he could motivate children to save their beautiful motherland, so that sea lions reappear in the waters off the east of Korea.”

A day after visiting Daegu, Lee moved to Ulleung Island and visited elementary schools there to enlist more members for a group called the International Cooperation of Environmental Youth.

“We expect he will be able to help us save the natural scenery there, and also raise awareness of our efforts to promote Korea’s sovereignty over Dokdo,” Kim said.

Lee became known to the public after he posted 20 episodes of his cartoon series “Go Green Man” online. He was inspired by watching a science program on TV about climate change.

Spurred into action, he also created his own Web site, www.gogreenman.com, with the help of his father when he was 10 years old.

Lee said he could motivate other children to care about global warming and enlighten them about how important it is to protect the earth.

After his cartoons became famous, U.S. President Barack Obama sent Lee a letter of encouragement. Lee continued his efforts by visiting North Korea in August 2010 and sending a letter to Kim Jong-il suggesting the creation of a “Peace Forest for Children in Panmunjom,” a village on the inter-Korean border.