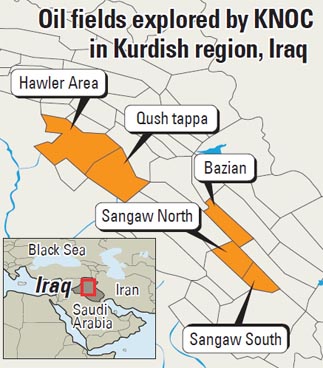 Korea National Oil Corp. has failed in its bid to find crude oil in the Kurdish region of northern Iraq, a ruling party lawmaker said yesterday.

Lee Hak-jae, a Grand National Party congressman, said the KNOC drilled three holes in as many oil fields but has found little or no reserves. It has begun work on a fourth - of a total of five planned - but the prospects of unearthing oil there are slim, he added.

Refusing to accept such a judgment, the government denied the project had fallen flat.

The project got under way with much fanfare in February 2008 and was promoted as a diplomatic success in terms of the overseas exploration of natural resources in what now looks like a premature wave of euphoria. 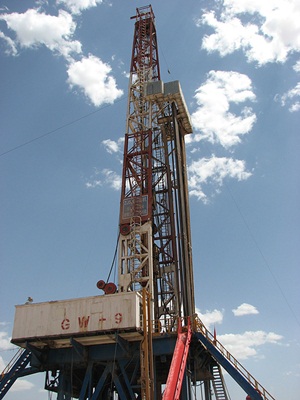 At the time, President-elect Lee Myung-bak visited the Kurdish region and met his counterpart Massoud Barzani. Their discussions led him to forecast that the work would yield 1.9 billion barrels of crude - enough to feed demand in Korea for two years - as well as infrastructure construction deals worth $2.1 billion.

The KNOC signed a contract with the Kurdish autonomous government in June 2008 despite strong resistance from Iraq’s central government, which has traditionally dealt with such exploration works.

Iraq labeled the contract unlawful and severed an oil-exporting contract with SK Energy, one of KNOC’s partners in the ongoing oil-exploration work.

“The development of overseas natural resources comes with huge risks attached and needs to be thoroughly reviewed in advance,” Lee said. “But it was glorified as [a significant diplomatic gesture] and not enough consideration was placed on its commercial value.”

The KNOC has a different level of interest in each of the five fields. Evaluations on three - Bazian, Qush tappa and Sangaw North - are ongoing in the wake of drilling while the Sangaw South oil field is still being explored.

Work has yet to begin on the Hawler Area field, which the KNOC does not have a controlling stake in. Equally, it only has a minority right in the Sangaw North field.

Crude oil was detected in Bazian but the findings fall far short of the original expectation of 1.3 billion barrels, and little if any of it seems to be of commercial quality. The KNOC holds a 50.4 percent stake in this field. SK Innovation owns 15.2 percent.

At Sangaw North, drillers only found water and tiny pockets of natural gas. Drilling to depths of 2 kilometers (1.2 miles) at Sangaw South - roughly half the planned distance - has shown little promise of turning up anything of value.

Lee said the state-run KNOC has effectively poured 440 billion won ($400 million) down the drain. Just over half of the sum was paid to the Kurdish government in the form of an advance bonus.

The project was besieged from the beginning with complaints that oil reserves in the area had not been verified.

Under the terms of the original deal, the KNOC agreed to explore and receive oil in return for building $2.1 billion worth of infrastructure. However, a consortium of companies formed by the KNOC failed to come up with the funds need to finance the arrangement, leading to renegotiations that are ongoing, Lee said.

“We’re now renegotiating the deal with the Kurdish government, but we are not in a position to talk about what is being discussed,” said Jeong Gwon, a deputy director at the ministry’s department of natural resources.

The Kurdish government has also backtracked. In 2008, it promised to provide 65 million barrels of crude oil if the fields do not yield acceptable deposits of crude, but it has now downwardly revised this number to 20 million barrels.

In exchange, it is now seeking a cash payment of $1.2 billion and infrastructure work worth $700 million, Lee said.

Furthermore, the Iraqi central government has blacklisted the KNOC, causing it to miss out on preliminary qualification for other potentially lucrative oil-drilling projects in Iraq, he added.