After blackouts, MB lashes out at Kepco execs, KPX

After blackouts, MB lashes out at Kepco execs, KPX 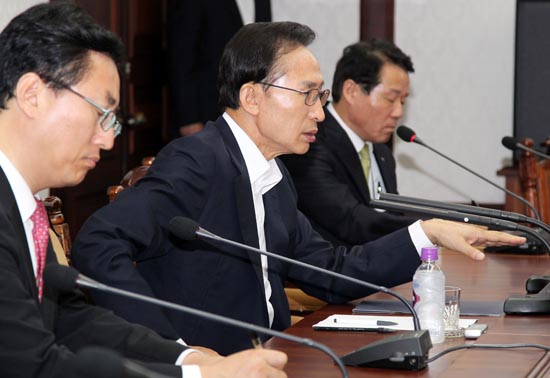 President Lee Myung-bak, center, urges officials at the Korea Electric Power Corporation to come up with measures to thoroughly respond to Thursday’s power outages, at Kepco headquarters in Samseong-dong, southern Seoul. On the left is Knowledge Economy Minister Choi Joong-kyung and on the right is Kim Woo-kyum, Kepco vice president. [YONHAP]


President Lee Myung-bak visited the headquarters of the Korean Electric Power Corporation and harangued its management for the blackouts that affected broad parts of Korea Thursday.

“I’m not here to listen to your briefing,” he told top executives at Kepco headquarters in southern Seoul yesterday afternoon. “You are saying Kepco is a world-class company, but have you thought about patients in hospitals and small and medium-sized companies without electricity? Find out who is responsible!”

Lee talked to the executives for about 30 minutes. Also at the meeting was Minister of Knowledge Economy Choi Joong-kyung.

“Kepco, the Ministry of Knowledge Economy and Korea Power Exchange are all responsible,” Lee said. “You have done something that should never happen. I feel ashamed of even talking about it.”

More than 1.62 million families across the nation faced power outages Thursday without any notice, and the government is taking heat for the unprecedented blackouts.

People were trapped in elevators, factories were forced to halt production and hospitals in many cities lost power for a while.

Civic groups as well as netizens posted critical comments online throughout yesterday about the government’s failure to prevent the chaos by anticipating a surge in demand after an unusual - but predicted - rise in temperatures.

An increasing number of people and companies that were directly or indirectly affected by the blackouts are planning on filing class lawsuits against the state-run Korea Electric Power Corporation (Kepco), which is in charge of the country’s power.

On Thursday afternoon, the Korea Power Exchange (KPX), which is under Kepco, temporarily cut power supplies for major cities as electricity demand reached a peak due to high daytime temperatures.

At 3 p.m., Korea’s power consumption reached 67.28 million kilowatts, which is much more than KPX’s prediction of 64 million kilowatts. To preserve the country’s electricity reserves, it intentionally cut power by starting rolling blackouts to prevent an overload.

Electricity was fully restored before 8 p.m., ending the nearly five-hours of blackouts. Power reserves were restored to 4.8 million kilowatts.

“Unusually high temperatures led to a surge in power demand, which spurred an overload amid ongoing maintenance of some power plants,” said Knowledge Economy Minister Choi. “Temporary power cuts lasting for 30 minutes per region were inevitable.” 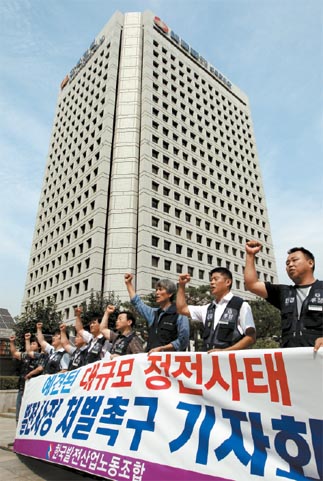 Though the government explained that “cutting power was inevitable to maintain sufficient power reserves,” there are mounting complaints from the public that notice should have been given in advance. A warning could have prevented inconveniences and losses especially for small- and medium-sized firms running factories, or one-man businesses such as restaurants and entrepreneurs in the service industry.

In industrialized zones such as Ulsan, where factories run by SMEs are concentrated, around 20 manufacturing firms had to halt production due to the outages. Large companies such as Samsung Electronics, Hyundai Motor, SK Energy and Posco said they were not affected because they have their own power stations for emergencies. Butcher shops and restaurants lost power in their refrigerators, causing vegetables and meat to lose freshness.

“There should be proper compensation from the government for those that have been emotionally and economically damaged,” the Citizens’ Coalition for Economic Justice said in a statement yesterday. “If not, we are planning on filing a class suit to promote the public interest.”

In response to the criticism, Knowledge Economy Minister Choi said yesterday to lawmakers, “The government will positively consider the matter of compensation.” He said, “The country’s power reserves [on Thursday] were lower than expected and if Kepco did not cut power supply at that moment, it could have caused a much bigger problem, perhaps requiring more than 40 hours to restore power supply.”

The ministry was careful to keep the power supply and demand in balance during the summer and winter. And based on unusually sultry weather this year, it extended the emergency power supply period by one week from June 27 to Sept. 9 and enhanced monitoring. Last week, the ministry even patted itself on the back for successfully managing the peak period, saying that its “preemptive measures and policies enabled the country to get through the summer without any crises.”

But as the hot weather continued after Chuseok, the ministry nodded off to sleep at the wheel.

“We failed to predict the flow of power demand,” said Do Kyung-hwan, an official at the Knowledge Economy Ministry in charge of energy industry.

Industry analysts blame the country’s low electricity rate compared to other developed nations, which produces more demand. In 2010, Korea’s electricity charges covered only 90.2 percent of the cost of producing the power.

“The fundamental reason for blackouts is the country’s cheap electricity price,” said Chung Han-kyung, head of the electricity department at the Korea Energy Economics Institute.