Slugger to make his Hanwha return next season

Slugger to make his Hanwha return next season 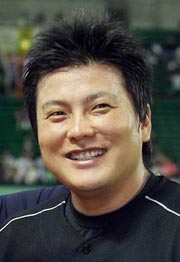 In an interview last weekend with Ilgan Sports, the JoongAng Ilbo’s daily sports newspaper, Kim said he won’t negotiate with other teams in the Korean Baseball Organization and is only thinking about joining his hometown club, the Eagles.

“I want to go back to Hanwha because it’s my hometown club that raised me,” Kim said. “I don’t want to see Hanwha competing with other clubs for my transfer.”

The 29-year-old made his professional debut with the Eagles in 2001, when he was named Rookie of the Year.

Kim played nine seasons before moving to Japan’s Nippon Professional Baseball league in 2009 to sign a three-year deal with the Marines.

The slugger had a solid debut season in the NPB with a .268 batting average, 21 home runs and 92 RBI in 141 games last season. However, Kim suffered a series of injuries this year and went through a slump.

Weighed down by the guilt of his poor performances, Kim asked the Marines to terminate his remaining contract. Both sides finally reached an agreement in July.

After nullifying his contract, Kim was criticized by fans who claimed the slugger has made a bad example for future Korean baseball players who wish to play in the NPB. Kim recalled that it was a difficult time for him, but said it wouldn’t stop him from returning to the Eagles.

“I expected harsh criticism when I made that decision,” Kim said. “But what’s important for me is to enjoy playing baseball and take care of my family.”

According to KBO regulations, Kim can start negotiating with KBO clubs after this baseball season ends, but it looks almost certain that the 2008 KBO home-run champion is going to wear the Eagles jersey again.

In fact, the Eagles have already announced that they will bring Kim back on their roster next season.

Hanwha Group Chairman Kim Seung-youn, who is also the owner of the Eagles, promised fans during his visit to Jamil Baseball Stadium last month that he will bring the slugger to Daejeon next season.

Baseball pundits say that now the question is how much Kim will receive for his contract with Hanwha.

The Eagles have said that Kim will get the best deal among the Koreans who returned from foreign leagues. If this is true, Kim is expected to earn more than 600 million won ($550,000) as his salary.

Koo Dae-sung received a similar amount in 2006 when he returned to the Eagles from the New York Mets. However, Kim said money isn’t the issue and what’s important is that he wants to enjoy playing baseball like he did with the Eagles in the past.

“I had a good memory while playing for Hanwha and that’s more important than money,” Kim said.