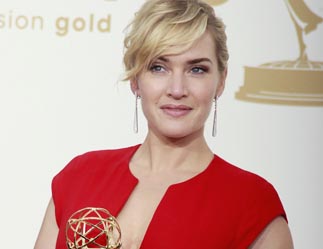 The Oscar-winning star plays a divorcee single mother who opens a restaurant to survive in the Great Depression in the drama, for which her English-born co-star Guy Pearce won best supporting actor Emmy moments earlier.

Winslet gave a short acceptance speech saying she “didn’t think we were going to win anything” - until her gong it had been having a disappointing night - before thanking her mother.

Brian Percival also won best director for “Downton Abbey,” which tells the story of the aristocratic Crawley family in the stately home of the show’s name.