Paul McCartney to tie knot where he first married

Paul McCartney to tie knot where he first married 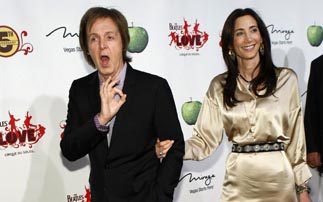 LONDON - Paul McCartney is set to tie the knot at the venue where he first married more than 40 years ago.

Officials said Friday that the former Beatle and fiancee Nancy Shevell have posted a notice of intention to marry at London’s Marylebone Register Office.

Westminster Council said the notice was posted Wednesday, meaning the couple could marry anytime after September 30. They have a year to hold the ceremony.

The document lists the musician under his full name James Paul McCartney and describes him as a “business executive.”

Alison Cathcart, Westminster City Council’s superintendent registrar, said she would be officiating and was “delighted that Paul and Nancy have chosen Marylebone Town Hall for their special day.’’

“Lots of couples get married here because of the venue’s reputation as a rock ‘n’ roll place to tie the knot, and this ceremony will certainly continue that legacy,’’ she said.

McCartney married his first wife Linda at the venue in 1969. She died in 1998, and he later married Heather Mills. They divorced in 2008.

The town hall has seen many celebrity weddings, including those of Beatles drummer Ringo Starr and Oasis singer Liam Gallagher.