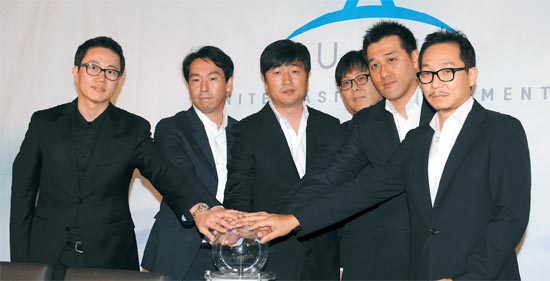 Jeong Young-beom, CEO of Star J Entertainment, right, attends the launch of United Asia Management, of which he is also the CEO, on June 24. With him are representatives of the other five UAM members, from left: Choi Sung-jun, chief operations officer of YG Entertainment; Kim Young-min, CEO of SM Entertainment; Hong Eui, CEO of AM Entertainment; Jeong Wook, CEO of JYP Entertainment; and Yang Geun-hwan, CEO of KeyEast Entertainment. Provided by UAM


With demand for cultural content from Korea rising around the globe, six of the nation’s major entertainment management agencies have joined forces to bring their artists and products to a broader audience.

“There is an urgent need for an agency that can reach beyond Korea to capture the Asian market,” said Jeong Young-beom, the CEO of United Asia Management, the newly formed company whose mission is to fulfill that need. “As the market for Korean content continues to expand, management agencies have seen an increase in business in foreign countries. Rather than making separate efforts to enter these countries, I thought it would be better if the agencies could help each other, despite having to compete with one another from time to time.”

Jeong, who is also the CEO of Star J Entertainment, said he began developing the idea for a single entertainment agency a decade ago, when he first tried bringing Korean entertainers to Japan.

“While trying to connect Japanese producers with Korean actors and actresses, I came to realize that in order to be successful in a foreign country, a foreign corporation was needed,” said Jeong.

Jeong said that up to this point, Korean entertainment companies have functioned as both artist managers, who guide an artist’s career, and talent agents, who make deals for film, television or commercial work.

But he said that’s too much business for one agency to handle, especially as they try to enter the Asian, let alone the global, marketplace.

“All entertainment companies have felt the same when doing business abroad. Even the Asian market alone is difficult for one company to handle by itself because individual companies lack a comprehensive database and manpower,” Jeong said.

Instead, he recommends a more focused approach in which companies share resources.

“I thought it was absurd for each entertainment company to struggle to gather as many contacts as possible in order to connect Korean celebrities to foreign production companies when all the other companies were doing the exact same thing,” he said.

So Jeong began meeting with the five other major entertainment companies to ask for their cooperation.

“As all of them empathized with the limitations of working alone, it was fairly easy for us to come to an agreement [on establishing a single company],” Jeong said.

Currently, UAM is building a database of celebrities who belong to the six entertainment companies. Information on producers, directors and foreign production companies will also be included in the future.

“I have decided to dedicate one year to building a large-scale database in order to approach the Asian entertainment market systematically,” Jeong said.

Jeong believes that the artists and content produced under the umbrella of the Korean Wave far exceed its current place in the global marketplace. But he thinks UAM can change that.

“In order to bring the excellent cultural content from Korea to foreign countries, we need an agency that is systematic and international,” he said.

Right now, he says his biggest concern is that UAM is being seen as a “powerful group” that will eventually kill all the other smaller management companies in Korea.

“I feel sad that our intention of forming a united agency is being distorted,” Jeong said. “We are still like a small sapling, but people are treating us like a gigantic tree and we feel like we are getting pruned for the wrong reasons.”