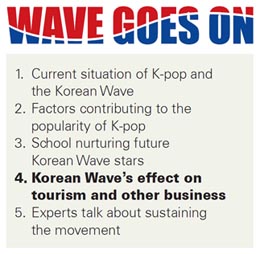 Despite the rain that drizzled down on a recent day earlier this month, the front gate of Choong Ang High School in Gye-dong, central Seoul, was crowded with tourists, mainly from Japan and Malaysia, who were fussing with their cameras and trying to get a good shot of the place that served as the backdrop for the start of a lifelong love affair between the main characters in the 2002 drama “Winter Sonata.”

“I can’t believe I’m here,” one of the Japanese tourists said, blushing with excitement. “I’m a big fan of Yon-sama [as actor Bae Yong-joon is known in Japan] and his drama ‘Winter Sonata.’ ”

Across the way, fans flipped through posters of their favorite Korean stars at two small souvenir shops stocked with K-pop paraphernalia. According to the store owners, the most popular items, by far, are the posters of Bae and actress Choi Ji-woo, the two main characters in the drama that sparked the Korean Wave, or Hallyu, in Asia. Also attracting attention were star badges, postcards and cushions emblazoned with images of celebrities like actor Jang Geun-seok as well as K-pop bands like TVXQ, Girls’ Generation and Super Junior.

Song Yoon-ja, the owner of one of the two souvenir shops in front of the school, said she has served bus loads of foreign fans visiting the site as part of a popular tour program and she has witnessed the reciprocal effect on her business.

“I opened this shop seven years ago, and back then, it was mainly Japanese tourists who visited the school,” she said. “These days, however, they come from all over. There are not only tourists from Japan, but also China, Malaysia, Mexico and France.”

Song said the tour also includes stops at traditional areas nearby like Bukchon Hanok Village and Samcheong-dong. The village, located in between Gyeongbok Palace and Changdeok Palace, is known for its tight cluster of hanok, or Korean traditional houses. Samcheong-dong is lined with upmarket cafes, restaurants, galleries and boutiques.

The high school was the setting for three episodes of “Winter Sonata,” and local tour agencies report that tours that include this stop are the most popular programs among an increasing number of tourists from countries all over the world.

“We offer several tour programs that are sought by many foreign tourists,” said an official from H.I.S. Korea, a leading tour agency based in Japan. “And one of them includes a visit to Choong Ang High School along with other traditional sites nearby like Gyeongbok Palace and the Insa-dong area.”

When the romantic and bittersweet drama was first broadcast on Japan’s NHK, it created a buzz in Japan and a massive number of Korean Wave fans, triggering the Korean Wave. That, in turn, has had a significant effect on tourism and other related businesses, while boosting the local economy.

Actor Bae Yong-joon and actress Choi Ji-woo, bottom left, helped spark the Korean Wave with their starring roles in the 2002 drama “Winter Sonata.” The popularity of the show has drawn visitors to places where it has been filmed, including Choong Ang High School in Gye-dong, central Seoul, top left, and Nami Island in Chuncheon, Gangwon, right, where Japanese visitors take a stroll. [JoongAng Ilbo]

Choong Ang High School is just one of the sites crowded with tourists reminiscing about scenes from their favorite drama. The school, however, is only open to the public on Sundays and every other Saturday, when there are no classes, meaning that tourists hoping to trace their favorite stars have to go elsewhere during the week. Luckily, there are a number of other sites to accommodate them.

On Nami Island in Chuncheon, Gangwon, fans can stroll down a long tree-lined path walked by the young lovers in “Winter Sonata.”

A mere 270,000 tourists visited the small island in 2001, but by last year, the number had shot up to 2 million. The island pulls in 20 billion won ($18 million) in sales per year, a major portion of which is contributed by visitors from Japan, China, Thailand, Malaysia, Taiwan and Singapore.

That number also gets a boost from the Korean Wave Express program offered by Korail Tourism Development, which is a subsidiary of Korail. The tour takes visitors to popular attractions from Korean dramas via the high-speed railway from Seoul to Chuncheon.

“Hallyu sites, including Nami Island, contribute greatly to drawing foreign tourists to Korea, which in turn helps the domestic economy,” said a Korea Tourism Organization official. “The Korean Wave helps boost the economy both directly and indirectly, and it does so more than we think.”

Visitors pose with a cardboard cutout of Lee Yeong-ae at Dae Jang Geum Theme Park in Yangju, Gyeonggi. In the photo at right, the actress appears with her costar, Ji Jin-hee, in the drama that gave the theme park its name.


The Dae Jang Geum Theme Park in Yangju, Gyeonggi, is also a popular site visited by drama fans, as it is the main location of the MBC drama “Dae Jang Geum” (“A Jewel in the Palace”) starring top actress Lee Young-ae. According to the Korea Culture & Tourism Institute, the theme park is one of the 10 most frequently visited sites by foreigners in Korea.

Another popular tour takes visitors to neighborhoods in Seoul such as Samseong-dong in the southern part of the city, where many Korean Wave stars, including singer Rain and actresses Song Hye-kyo and Kim Nam-joo, live. This area, which is often referred to as the “Beverly Hills of Korea” by Korean Wave fans, also houses the stars’ management companies.

Haruka, a Japanese fan, was a recent visitor to the neighborhood.

“I recently visited the stars’ residences in Samseong-dong, and just thinking about the fact that stars frequent this area makes me happy,” she said.

Despite the positive impact that tours and related products have had on the country’s economy, there are a growing number of travelers who say that most tour programs fall short of expectations because they are disorganized.

One reason for this may be that there is not a governmental tourism organization to run the programs. The Korea Tourism Organization currently offers no Korean Wave programs or travel packages. Instead, these are all run by private companies.

“Many of the trips and tours related to the Korean Wave are managed by private travel agencies,” the KTO official said. “Instead, we are in charge of overseeing the Korean Wave phenomena and coming up with favorable policies.”

And even private travel agencies do not sell tours wholly centered on the Korean Wave, instead offering short day trips or bus tours.

“We receive many inquiries about tours to Korean Wave sites, but we don’t offer specific programs related to that demand,” said an official from Hana Tour, the nation’s leading tour agency. “Instead, tourists can choose to add special trips or day tours to longer travel packages.” 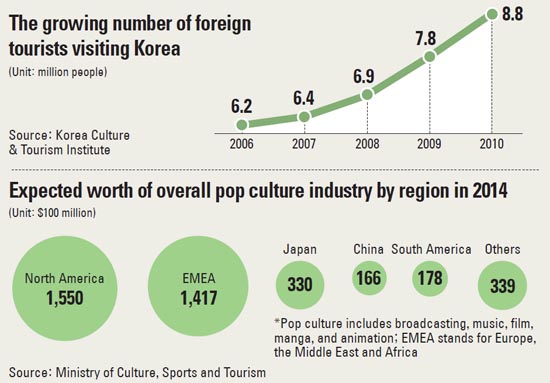