Do the Lotte Giants deserve the honor?

Do the Lotte Giants deserve the honor? 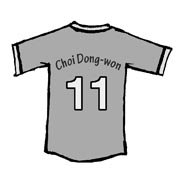 In 1929, the New York Yankees became the first team in Major League Baseball to wear uniforms with numbers on the back. At first, the numbers had no special meaning other than signifying the order of players at bat. Babe Ruth, who normally batted third in the order, took number three while Lou Gehrig, who came after Ruth, was assigned the number four.

But when Gehrig suddenly fell ill in 1939 with amyotrophic lateral sclerosis, an illness which now bears his name, his team decided to present him with a special honor. As his career was cut short, the New York Yankees retired Gehrig’s number and, ever since he left the field, no other Yankees player has worn the number four.

Other teams in baseball and other sports followed in the Yankees’ footsteps and began to retire the uniform numbers of their most valued players at their retirement. Of course, this is a very special honor that should only be awarded to players who have solid relationships with their clubs. Gehrig, for instance, had played in 2,130 consecutive games in 17 years and was nicknamed “The Iron Horse.”

For legendary athletes, multiple teams have awarded the honor. Nolan Ryan made history by playing a record 27 years in Major League Baseball, and three different teams for which he played retired his number. All three wanted to be part of his legend.

However, some retirements been ridiculed. When Brazilian football legend Pele retired, the New York Cosmos retired his uniform number, and soccer fans were perplexed. Pele had only played for the Cosmos for three years before his retirement, after spending 19 years with Santos in Brazil.

Now, the Lotte Giants are considering a similarly perplexing retirement of uniform number 11 that had belonged to pitcher Choi Dong-won, who passed away on Sept. 14.

Choi played with Lotte for eight years since the team was in the amateur league before the launch of the professional baseball league, so he certainly deserves the honor. But, the Giants must explain why this decision did not coincide with Choi’s retirement from the team. The Giants did not show much interest in Choi for more than ten years after he retired in 1990.

The team should also clarify why it suddenly traded Choi in 1988 if it wants to be a part of his legacy.

These actions would be the least amount of courtesy Lotte could show to Choi and his fans.