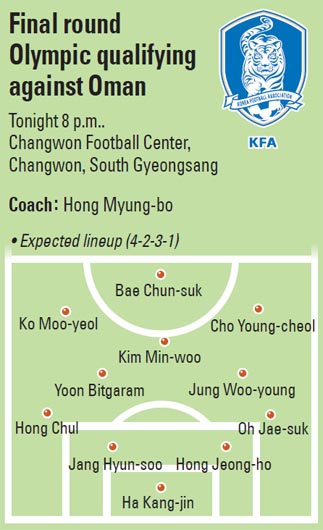 Despite the absence of its European-league players, Korea’s men’s Olympic soccer team begins its road to the 2012 London Olympics as it hosts Oman at Changwon Football Center in Changwon, South Gyeongsang tonight.

Led by coach Hong Myung-bo, the Korean under-23 team is aiming to reach the quadrennial event for the seventh consecutive time. Korea has reached the final round of Olympic qualification by beating Jordan in June, but this time the team has to face three other Middle Eastern nations - Oman, Saudi Arabia and Qatar - in Group A.

Since Oman is considered to be the weakest of the trio, and the match is the opener of final-round qualifying, Hong has said he will not be satisfied with anything other than a win today.

The team has won its previous two encounters with Oman, most recently beating it 3-1 in a friendly in June in Gangwon.

“We can be confident with the last friendly result against Oman, but we can’t be conceited,” Hong said during the team’s first training session last Wednesday. “We will prepare for the match very carefully.”

The young Taeguk Warriors are missing their European exports because, unlike World Cup qualifying, the clubs are not obligated to send their players to Olympic qualifiers. This means that strikers Ji Dong-won (Sunderland) and Son Heung-min (Hamburg), and midfielders Koo Ja-cheol (Wolfsburg) and Nam Tae-hee (Valenciennes), will not feature.

Since those absentees play a big role in the team’s offense, there are concerns that Hong’s team may lack sharpness in attack. To fix the problem, the coach has called up his attackers from the J-League.

Cho Young-cheol and Kim Bo-kyung, who play for Japanese clubs Albirex Niigata and Cerezo Osaka, respectively, are likely candidates for the two wings.

Kim, who fans have dubbed “the next Park Ji-sung,” has been a staple of Hong’s line-up in previous games. The 22-year-old midfielder is on a roll in Japan, where he has collected seven goals and four assists so far. He also helped Cerezo to its 4-3 win over K-League leader Jeonbuk Hyundai Motors in the Asian Champions League last Wednesday.

“I haven’t contributed much recently for the Olympic team,” Kim told Ilgan Sports, the JoongAng Ilbo’s daily sport newspaper, on Monday. “The match against Oman will be an opportunity to gear up my confidence. I will try hard to help the team secure victory.”

But speculation is rife that Hong may use Pohang Steelers forward Ko Moo-yeol instead as Kim suffered a minor shoulder injury last weekend.

Ko, 21, is having an impressive debut in the K-League, where he currently ranks as the eighth-best scorer with seven goals.

Experts also expect much from midfielder Yoon Bitgaram. The 21-year-old did not receive much praise in the second-round qualifier against Jordan, but will try to restore his reputation as a playmaker against Oman.

“I haven’t carried out my role effectively in recent matches,” Yoon said. “But this time it will be different. I have improved both my mentality and my skills.”

Central defense will be taken care of by captain Hong Jeong-ho and Jang Hyun-soo, who wears the armband for Korea’s U-20 team. Hong Chul and Oh Jae-suk are almost sure bets for left and right back positions.

Korea next travels to Qatar on Nov. 23 for its second match in Group A.

In the final round of Asian qualifiers, the teams are divided into three groups of four and play each other on a home-and-away basis. The winners qualify for the Olympics automatically while the runners-up vie for the final playoff spot. The group stage wraps up in March.