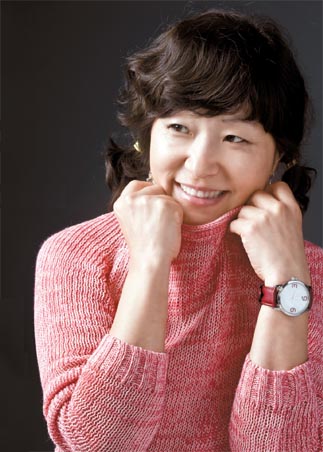 Eun Hee-kyung’s “A Gift from a Bird” has been something of a rite of passage for teenagers and twenty-somethings in Korea since its publication in 1995.

The novel contains phrases ranging from “I completed my life too early” to “I had no need to grow further after age 12” and “Life is full of disappointing and trivial coincidences, so don’t try to dig up the meaning, since life is a joke.”

Those epigram-like comments are made by the 12-year-old Jin-hee, the novel’s heroine. In the eyes of this mature girl, the daily life of adults and the first moon landing of Apollo 11 in 1969 are equally boring and unexciting. Her mockery of life and cynicism resonated with readers by arousing the child lurking deep in their hearts.

Eun wrote “A Gift from a Bird” in the same year she won the Dong-A Ilbo’s literary contest with her debut short story, “A Duet.”

“A Gift from a Bird” won the first Munhakdongne Novel Award and, since its release in 1995, it has sold over 700,000 copies and 73 editions have been issued.

Eun, who was in her mid-30s when she wrote the book, is now 52 years old. Last November she released her sixth full-length novel, “Let Boys Cry,” and published a collection of 120 essays and Twitter messages, “Sundays’ Thoughts,” eight months later. The writings are light and emotional, revealing an entirely different side of her.

The JoongAng Ilbo sat down with the novelist, whose calm voice still contains girlish tones. The following are the excerpts from the interview.


Q. “Sundays’ Thoughts” is your first essay collection. Where did the essays come from? 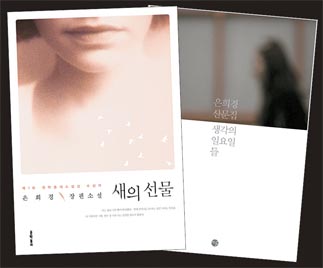 “A Gift from a Bird” and “Sundays’ Thoughts”

A. I have kept a sizable number of essays since my debut. I knew I would publish them someday, but most of the writings didn’t meet my expectations. The essays I have released this time are a collection of replies I’ve sent to readers who made comments on my recent novel “Let Boys Cry,” which was released day by day over the Internet. I was, of course, worried about exposing myself too much because the letters were solely about myself as a human being. I sort of thought of myself like an actress who was reluctant to appear in the nude in films but abruptly changed her mind and did the opposite. In a way, I’ve become gutsier than before. Maybe I’ve shed the desire to be seen as special.

How have readers responded to the essays?

People seem to consider them light and pleasant. Whereas I try to be accurate and sharp in my novels, I showed a more relaxed side of myself in the essays. But I hope that people don’t think the person I’ve described in the essays is the real me. I have many dimensions.

Are there any clubs for your novels?

A Web-based fan community called “Eun Hee-kyung Magic Circus” was formed more than a decade ago. The initial members will be mothers and fathers by now. I don’t know if any of them are still active. Once, I went out on a picnic with the members of the community at their invitation. They didn’t treat me like a special figure. We drank together just like university students on a retreat. I liked the informal setting.

The book also contains messages that you’ve posted to your Twitter page. The messages give the impression that they were quite painstaking pieces of work. Were they?

I always try to think of quality sentences even when I am walking. I’m not a big fan of memos, so whenever I think of good sentences, I write them on Twitter.

You once appeared in a Hong Sang-soo film. What was that like?

Yes. I played myself in his short film “Cheopcheopsanjung” in 2009. I appeared in a scene where I said to an aspiring novelist who visited my house: “Do your best.” It took two days to shoot the scene, and it was fun. I described the experience in my novel “Calm Life,” which is being serialized in the monthly literary magazine “Creation and Criticism.”

You seem to enjoy using “you” in your novels and essays. But it is hard to identify who “you” is. Could you comment on this?

When I’m writing a novel, I am in it. It shows who I was close with, which places I frequented and what hurt me. Sometimes people ask me if “you” was my lover, but what “you” refers to differs each time. It could be a female friend or family member.

You once said that you quit your job as an office worker and became a novelist in your mid-30s, after realizing you were being fooled by your own life. What did you mean by that?

Before becoming a novelist, I was very faithful to the social system and ideology. But I suddenly felt that I had failed to find what I truly wanted, as I had instead followed the typical route imposed by society. I chose to be a novelist in search of that.

In “A Gift from a Bird,” the main character Jin-hee is depicted as having become cynical after having suffered a great deal.

Since the degree of loneliness and distress that a person feels varies from person to person, it’s hard to describe one person’s pain in an objective manner. I don’t make the leading characters in my novels let out a howl of anguish. I try to depict their pain by showing how they tolerate it.

Now that the book is out, do you have more free time?

I never imagined a novelist could be this busy. I will be traveling to Spain for three months in October as part of a residency program offered by the Korea Literature Translation Institute. Before that, I will spend time giving lectures and participating in several literary award competitions as a judge. My schedule is full, and I am regretting my decision to keep myself so busy.

* Began her literary career in 1995 after winning the Dong-A Ilbo’s annual spring literary contest with her short story, “A Duet”

* Won numerous local literary awards with novels such as “Beauty Despises Me,” “Save the Last Dance for Me,” “Secrets and Lies,” “Happy Ones Do Not Look at the Clock” and “The House I Lived In”