Ways to keep the Wave rolling around the world

Ways to keep the Wave rolling around the world 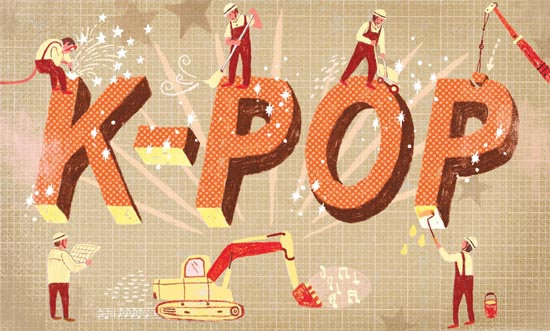 
In a black, body-hugging dress, 22-year-old Singaporean college student Adilla Ayoub sang and danced to the upbeat K-pop song “Black and White” by G.NA. This tanned lady’s rendition of the song was impeccable. Montalbo Raechelle, from the Philippines, was up next with an acoustic rendition of 2NE1’s “Lonely.” She was shy and nervous but managed to get through the song, accompanying herself on a guitar.

Fifteen contenders from as many as 10 countries including Spain, Vietnam, Malaysia, Germany, Canada and the United States filled the open-air K-pop Contest, hosted by state-run broadcasting station KBS in central Seoul in early July.

The high temperature and humidity typical of a summer day in Seoul didn’t bother the contenders or the audience. Everyone shrieked whenever the show’s hosts dropped the names of their favorite stars, as if those luminaries had suddenly materialized on the stage.

American college student Elizabeth Beasley was an eager audience member. She personally loves K-pop and Korean dramas but wasn’t sure if Korean cultural exports will ever really take off in the North American and European markets, which are considered the hardest markets for Asian signers to conquer.

“I first started to watch Korean dramas on video-streaming Web sites,” Beasley said. “My first was ‘Boys over Flowers.’” She was hooked on the music on the show and became an ardent K-pop fan. “Some know about K-pop and some don’t in the States,” she said. “I think it’s just at a beginning stage.” 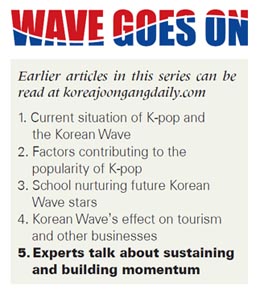 In order to develop the K-pop craze into new markets and make it a more sustainable export, related Korean ministries and entertainment agencies are coming up with diverse plans. The Ministry of Culture, Sports and Tourism plans to launch a fund that is estimated to be around 1 trillion won ($909.1 million) by 2015. The fund will be spent on large-scale global projects for pop culture exports.

“This is the largest fund we’ve ever launched,” said Park Hye-jin, an official at the Culture Ministry in charge of the fund. “There have been many fundings [for development of cultural content] but they all targeted the domestic market. This one aims at the global market.

“If there is a huge global film project, funding will be injected into it,” Park said. Since the cultural content industry is not a reliable investment, the ministry believes some policies have to be directed from the top down.

“The cultural content industry is a very risky investment for investors,” Park said. “If you invest on a computer-game project, you expect the game will eventually be launched. But there are a lot of chances the game won’t be launched for many reasons, which makes it hard for the industry to attract many investors.”

Hong Seok-kyung, professor of communications at the University of Bordeaux 3 in France wrote in a thesis earlier this year that the online-based Korean Wave should be brought offline if the government wants to see it spread to a broader audience. An example of that notion was the first Paris concert by SM Entertainment singers, including Girls’ Generation and Super Junior, in June. For the Paris concert, cultural centers in Britain and Paris played crucial roles. For instance, the Korean Cultural Center U.K. held K-pop concerts and other events such as Korean drama screenings in Britain to raise awareness of Korean cultural content, which brought K-pop and K-drama fans together.

“There are things the government should do for the growth of K-pop and K-drama,” said Shim Sang-min, professor of media communication at Sungshin Women’s University.

According to Shim, the government should create a culture “cluster” among ministries and agencies. “There are many different government organizations that are in charge of cultural contents,” he said.

“The Culture Ministry, the Korea Communications Commission and the Ministry of Knowledge Economy all have their own share of responsibilities in cultural content issues,” he said. “That prevents us from attracting investment and quality workers from overseas.”

A major problem is that Korea doesn’t quite respect its pop culture exports. “Traditionally, such content was considered low culture. But what we have to learn from the United States and European countries is that they do know how to appreciate their popular cultures, which I call culture leadership.”

In coming up with an organized culture cluster, some say, the term “Korean Wave” should be abandoned for something less nationalistic sounding.

Michael Breen, chairman of Insight Communications Consultants, said, “Using nationalistic terms can be damaging” during a conference entitled “Globalization of Korean Pop Culture and Content Industry” that was co-hosted in June by two state-run organizations, including the Korea Creative Content Agency and the Korea Foundation for International Culture Exchange.

“Europeans in particular hate nationalism. That’s because nations have armies and nationalism led to two world wars in the last century,” said the 57-year-old former journalist. Breen recommended that the marketing should focus on the performers themselves, without wrapping them in the standard of the Korean Wave.

Sporadic anti-Korean Wave campaigns prove the point. In mid-August, between 1,500 and 2,000 Japanese gathered in Tokyo to demonstrate against broadcaster Fuji TV, saying the station was forcing them to watch Korean exports, including drama series and music. Fuji aired six Korea-related shows and dramas on Aug. 18. Many of the demonstrators refused to talk to the Korean media when asked why they took to the streets that day.

Kim Eun-ah, spokeswoman at SM Entertainment, agrees with Breen. “The important thing is having two-way communication with our fans,” she said. “We can’t expect them to love our culture but we need to show our interest in their culture. This is the reason why we seek talents not only in Korea but from many other countries.”

“Looking at performances of Korean idol signers, they are like robots due to years of harsh trainings,” he said. “You know their dance moves are very different from Westlife or the Backstreet Boys.”

An important part of a future for K-pop is in live performances, Bae said.

“The world’s music market is heavily focused on performances rather than selling CDs or downloaded files due to the changed way of listening to music,” Bae said. “Even Prince hands out CDs to his fans at his concerts.

“In order to do that, they [Korean singers] should know how to sing live like Beyonce or Christina Aguilera. I don’t think many of them are prepared for that, though.”

The issue of plagiarism was raised by Korean-American Susan Kang of Soompi.com, the longest-running Web site catering to K-pop and K-drama fans around the globe from 1998.

“The issue of plagiarism is one that comes up way too often, whether it be copying an American song, or even another lesser-known K-pop song,” wrote Kang in an e-mail.

Experts told the Korea JoongAng Daily they were optimistic about the future of Korean cultural content.

“Their music is very cosmopolitan with simple lyrics and hooks,” said Lee Dong-yeun, professor at Korea National University of Arts who published a book about Korean idols earlier this year. “Anyone can enjoy their music. That characteristic adds permanent value to K-pop,”

Susan Kang had a similar take.

“As long as Korean content continues to be innovative and attractive, there is no limit to its growth,” wrote Kang. “I used to think that the language barrier would limit its appeal to Western countries, but the increasing growth in popularity in Europe says otherwise.”