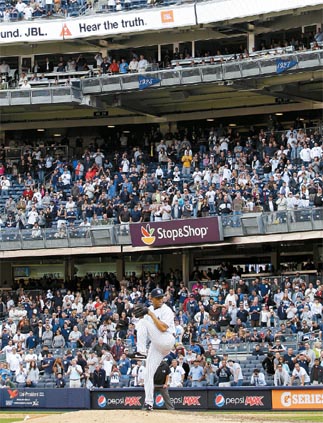 New York Yankees closer Mariano Rivera throws a pitch in the ninth inning against the Minnesota Twins to collect his 602th save at Yankee Stadium in New York on Monday. The Yankees defeated the Twins 6-4. [UPI/YONHAP]

NEW YORK - Long regarded as the best closer in baseball, Mariano Rivera now has more saves than anyone else, too. Rivera set the Major League record with No. 602, pitching a perfect ninth inning on Monday and preserving the New York Yankees’ 6-4 win over the Minnesota Twins.

With fans standing and cheering from his first pitch to his last, Rivera retired Trevor Plouffe, Michael Cuddyer and Chris Parmelee to end it. Parmelee looked at strike three - it appeared to be Rivera’s signature cutter - and Yankee Stadium roared in approval.

A remarkable achievement, considering the slender right-hander throws mostly one pitch. Opposing hitters have seen it for years, but still haven’t figured it out. In the meantime, he has built a Hall of Fame-caliber career and been a pillar of five World Series championship teams.

The only person who might not acknowledge that Rivera is not the best closer of all time is Rivera himself.

“I would never say that - you know me better than that,’’ Rivera said. “I will never talk about myself. It’s impossible.’’

The 41-year-old Rivera tied Trevor Hoffman with save No. 601 on Saturday in Toronto. The AL East leaders lost on Sunday, putting Rivera in line to get the milestone in the Yankees’ last home stand of the season.

In the bottom of the eighth, Nick Swisher grounded into an inning-ending double play - and drew a loud cheer from fans who wanted to see history made at the ballpark for the second time this summer. In July, Derek Jeter got his 3,000th hit at home.

“The team did a tremendous job. Swisher, when he hit the double play,’’ Rivera said. “We won - that’s the important thing.’’

On Monday, the crowd hollered as Rivera came in to the customary strains of “Enter Sandman.’’ The fans grew louder with every strike, every out as Rivera closed in. He even broke a bat for good measure - sawing off Parmelee and sending the rookie back to the dugout for another piece of wood.

Eventually, Rivera was left on the mound and tried to sneak off the field with his teammates.