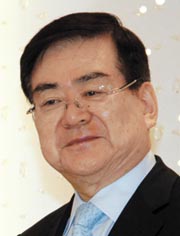 Hanjin Group Chairman Cho Yang-ho received an order, “Dostlik,” from Vitali Fen, Uzbekistan’s ambassador to Korea, at the Diplomatic Center in southern Seoul. The award was one of several to foreigners who contributed substantially to the central Asian nation’s development.