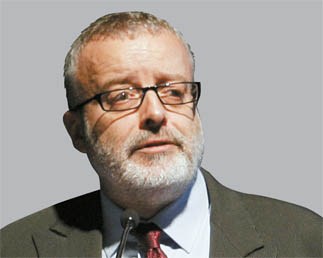 Amid uncertainty stemming from the recent economic woes of the United States and Europe, the Asian financial system is becoming more important, according to Charles Goddard, who leads the Economist Intelligence Unit’s editorial services in the Asia-Pacific region. Goddard was recently in Seoul to lead the Economist Conference at the Grand Hyatt hotel that brought together over 150 financial regulators, policy makers and business leaders. The unit is part of the Economist Group and provides economic and business analyses on more than 200 countries as well as strategic intelligence on major industries.

As Western financial markets totter, Goddard said in an interview last week with the Korea JoongAng Daily that it is important to examine the status of Asia’s markets to see if they can provide more stability.


Q. First of all, what is the main purpose of the Economist Conference?

A. One of the reasons for holding the conference is to get a better understanding of the region. The emerging Asian financial system is important given the problems the Western-led financial systems have. There is a strong need to take a moment to understand better and look forward more clearly at what Asia is beginning to offer.

For example, many important and large banks in the world are sitting in China, and it’s very important to try to debate what that means and whether or not there is a clear emerging set of trends related to the Asian financial and banking systems. There is also the need to discuss how that relates to the issues in the global financial system led by the Western world. At the moment, the world is capturing a moment of change and transition with the growing importance of the Asian financial system.

How would you evaluate the global economy? Is there a strong possibility of a double-dip recession?

Our view at the Economist Intelligence Unit is that we’re just able to avoid the recession but there are still many risks. Clearly, what’s happening is a result of the debt crisis in the euro zone countries and we’d be looking at Greece as a bellwether for sovereign debt problems in Europe. To be frank, Greece is already in default, and the real problems come when we start to look at problems in Italy. Italy is a much bigger economy than Greece, and problems in the Italian economy will start more trouble in the European economy. Looking at the Spanish economy as well, there is a certain risk of going back into a recession. That would have a problematic effect on the American economy as well. In fact, America is already looking very close to recession itself, and another shock like this would push it over.

The recent fluctuations in the international market showed how vulnerable Korea is to external shocks. How would you evaluate the Korean economy?

The biggest risk is that it’s exposed to the global economy and despite all the will and political ambition to restructure the economy, to promote services, and to refocus the economy on the domestic economy rather than the foreign economy, I don’t see that really happening. It’s quite clear that this is obviously a long-term ambition of the Korean government, but it’s not obvious that that’s happening. It’s more of a problem if it doesn’t happen in the long term because Korea is going to remain open to external shocks.

It has a stronger economy now than during the 2007 and 2008 global financial crisis and a stronger banking system. There are a lot of measures and conservative prudence going on, and some of the measures that were put in place were to prepare for the worst with foreign exchange controls. These are understandable given what Korea expects. But the Korean government is entirely focused on its exposure to the global economy and ultimately, that’s not a good thing. Korea should rebalance.

What issues were raised about the Korean economy at the conference?

The post-crisis landscape presents risks and opportunities for Korea’s globally integrated economy. Against that backdrop are concerns domestically about Korea’s financial services landscape. Domestic challenges, such as household debt, rising inflation and worrying wobbles in parts of the banking system all threaten to be a drag on the economy’s momentum. A leadership transition is on the horizon, which, when added to growing discord among the country’s financial regulators, gives rise to questions about the government’s commitment to the liberalization of its financial services sector.

At the conference, there was a question raised about whether there should be controls, and if regulation is really effective and productive for the Korean economy as it moves forward. It’s almost clear to me that ultimately, Korea should think about being more open to the international economy to become an international financial hub. But there are many factors that prevent it from really becoming one: its capital controls and, indeed, a currency that is not fully convertible.

What is your opinion of Korea’s cautious interest-rate policy? Should the Bank of Korea raise its interest rate?

The BOK’s decision to keep interest rates where they are at the moment is understandable under the circumstances. Korea is facing a slow economy, and if you raise interest rates you’re going to put upward pressure on the won. It will also attract more hot money to Korea. Exports will be under pressure as well, and that’s not something the Korean government wants to see.

I don’t see the central bank’s move as necessarily a bad one. At the moment, we’re seeing a spike in inflation mainly because of food prices and I don’t see core inflation running away. So it seems prudent to keep [the interest rate] at this point. But the bank needs to watch carefully what happens in the next two or three months.

On global finance, do you expect adjustments in global economic power?

Yes. What that means is that from a position where America had predominant economic influence, now it is learning to live with another economic power, China. America is trying to adjust to the reality. Of course, there is tension between the two. But it’s inevitable when you start to see the relative diminishing of one power and the relative rise of the other.