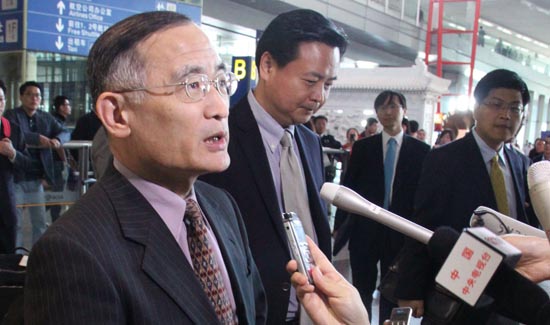 
South Korea’s chief nuclear envoy vowed yesterday to handle this week’s talks with his North Korean counterpart in an open and flexible manner, aiming for constructive steps toward the North’s denuclearization.

Wi Sung-lac is scheduled to meet with North Korean counterpart Ri Yong-ho in Beijing on Wednesday for the second round of inter-Korean talks this year on dismantling the North’s nuclear weapons.

“[My] basic position is that I will handle the talks in line with our principles, but I will approach them with an open and flexible mind,” Wi told Yonhap News Agency by phone, shortly before leaving for Beijing.

The envoy said he plans to focus on North Korea’s steps toward denuclearization and listen to any points the North may raise concerning the issue.

“Rather than discussing a specific [nuclear weapons] program, I plan to talk about making overall progress toward denuclearization,” Wi said.

The Beijing talks come two months after the envoys met in Indonesia for the first time in more than two years, starting diplomatic efforts to reopen the stalled six-party talks. The multilateral forum, aimed at ending the North’s nuclear weapons programs in return for economic aid, has been dormant since late 2008 due to the North’s nuclear and missile tests and its military attacks on the South last year.

Seoul and Washington have insisted that Pyongyang halt all nuclear activities and allow UN inspectors to monitor the suspension before the six-party talks reopen.

The North instead calls for an unconditional resumption of the forum, which also involves China, Japan and Russia.

North Korea has a track record of using provocations and dialogue with South Korea, the United States and other regional powers to try to wrest concessions before backtracking on agreements and abandoning talks.

Outside experts believe the North’s uranium enrichment program will give the country a new source of fuel to make atomic bombs, in addition to its widely known plutonium-based weapons program.