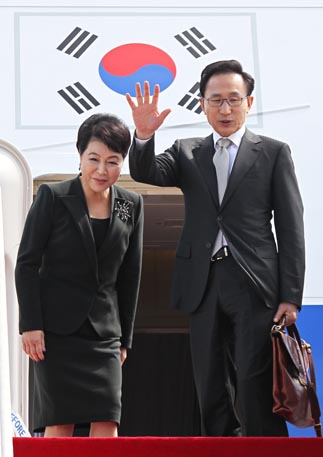 President Lee Myung-bak departed for New York yesterday to speak at the United Nations General Assembly on Korea’s position on reforming the international body and on his government’s policy on nuclear energy expansion.

The president is also to address a high-level nuclear safety meeting at the United Nations while he is in town before leaving on Thursday.

A senior Blue House aide said Lee’s keynote address at the Assembly, scheduled for Wednesday (EST), will highlight Korea’s commitment to playing a more responsible role in the international community.

With this year marking the 20th anniversary of Korea’s membership of the United Nations, the speech will also serve as an opportunity for Lee to speak on the country’s views on key international topics, the official said.

“Major agenda items include international peace and security, human rights, efforts to reduce development gaps, green growth and reform of the Security Council,” the official said. “We will make public our positions on the issues, particularly Security Council reform.”

The official said that Korea supports the efforts to increase representation and responsibility in the Security Council, the highest decision-making organ in the United Nations.

“Italy, Mexico, Spain and some other nations also share our position to increase the number of nonpermanent Security Council members,” he said, adding that, in contrast, Japan, India, Germany and Brazil have been lobbying to become permanent members.

“The two sides have been in conflict for 15 years, and it is an important discussion,” the official said.

“In the meeting, Lee will speak about Korea’s position as one of the world’s key users of peaceful nuclear energy,” the Blue House official said.

Despite international concerns about the safety of nuclear energy after the Fukushima disaster earlier this year, the official said that it was important for Korea to speak out and defend peaceful nuclear energy because it is a matter of national interest.

“Lee will state the position that the Fukushima crisis shouldn’t be a reason to give up on the peaceful use of nuclear energy,” the official said. “He will say that safety measures must be reinforced further so that nuclear power generation can be an option in fighting climate change, a more serious disaster.”

The official added that while renewable energy must be increased, Korea’s policy to build more reactors will remain unchanged because of the high energy demand needed to maintain sustainable growth.

In addition to Lee, leaders of six nations including France and Japan as well as U.S. Vice President Joe Biden will attend the nuclear meeting.

The Blue House said that Lee’s participation in that meeting will also help set the groundwork for next year’s Nuclear Security Summit, which will be held in Seoul.

On the sidelines at the United Nations, Lee will meet for the first time with new Japanese Prime Minister Yoshihiko Noda.

The two leaders are expected to discuss progress toward a free trade deal between the two countries and efforts to end North Korea’s nuclear weapons programs.

It is unclear whether Lee will bring up Japanese compensation for Korean sex slavery victims from World War II. Earlier this month, the Korean government proposed talks to determine whether the 1965 compensation treaty had exempted Japan from legal responsibility to compensate the so-called “comfort women.”

While in New York, Lee will attend a ceremony to receive this year’s World Statesman Award for his contribution to world peace, democracy and human rights. After New York, Lee will fly to Seattle, where he will meet with Korean residents as well as Microsoft co-founder Bill Gates.