To punish U.K., Seoul may use ‘Malvinas Sea’

To punish U.K., Seoul may use ‘Malvinas Sea’ 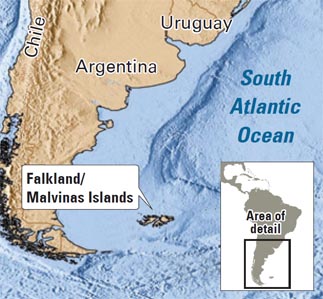 The government is considering changing the way it refers to the Falklands Sea to protest Britain’s refusal to use the term East Sea rather than Sea of Japan.

Currently, Korea refers to the Falklands Sea, which is near the British-ruled Falkland Islands, 480 kilometers (300 miles) east of Argentina. In the future, it may also start calling it the Malvinas Sea, tacitly recognizing both the U.K.’s and Argentina’s claims to the waters.

“So far, we have marked it as the Falklands Sea, considering it British territory,” a government official told the JoongAng Ilbo. “But given that the sovereignty dispute between the U.K. and Argentina is not ending, and is actually escalating, we are positively reviewing the simultaneous use of Malvinas Sea.”

According to diplomatic observers, the move is in response to the U.K.’s stance on the name of the East Sea.

Seoul has been trying to persuade the international community to use both East Sea and Sea of Japan to refer to the waters between Korea and Japan. Most countries call it the Sea of Japan.

The International Hydrographic Organization, the worldwide authority on oceanic names, is scheduled to hold a general meeting next April to discuss several disputed names, including the East Sea.

A Seoul official said Britain wielded strong influence when the IHO adopted the current worldwide hydrographic names, and it is sticking to the use of Sea of Japan.

The long-standing dispute over the name of the sea flared up early last month when the United States confirmed its position of supporting the use of the Sea of Japan.

The name East Sea is in the Korean national anthem. Historical documents show that Koreans called the waters the East Sea for around 2,000 years.

Japan, which colonized Korea in the early 1900s, is known to have started using the name Sea of Japan in the 1800s. The controversy of the sovereignty of the Falkland Islands has been renewed recently after the region was found to be rich in oil.

Argentina claimed the Falklands in 1820 when it gained independence from Spain, but the United Kingdom seized the islands in 1832.

In February 1982, Argentina invaded the islands, triggering a war with the United Kingdom. The British drove the Argentines off the islands after 74 days, at the cost of the lives of 255 British and 649 Argentine soldiers and three civilians on the island.