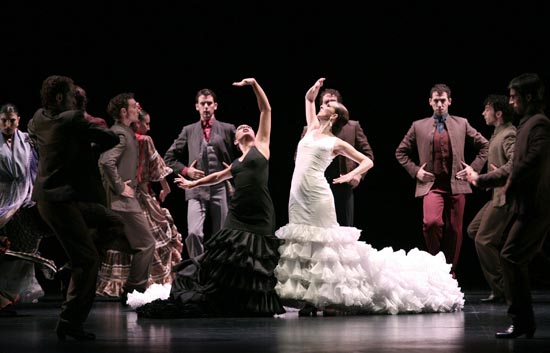 Ballet Nacional de Espana is scheduled to perform Oct. 6 to 9 at LG Arts Center in southern Seoul. Regarded as ambassadors of Spanish culture, the company does not just do ballet, it also deploys many styles of Spanish dance, with flamenco at the core. See THEATER, below. Provided by LG Arts Center

Benet was originally slated to perform here in the spring, but the concert was postponed after the earthquake and tsunami in Japan in March.

Saturday: Soprano Sumi Jo is celebrating the 25th anniversary of her debut with a concert that takes her outside of her usual spotlight in a grand theater. She will be joined by Steven Mercucio, an internationally renowned conductor; Joseph Calleja, a tenor often compared to Pavarotti; and Richard Yong-jae O’Neill, violist and the leader of Ensemble Ditto.

Tuesday: Russell Sherman is a pianist, educator and author known for his imaginative and poetic sensitivity.

He has performed at some of the best concert halls in the world, including Carnegie Hall, and played with leading orchestras, including the New York Philharmonic.

Sept. 29: The KBS Symphony Orchestra will be celebrating its 660th Subscription Concert. The orchestra will be playing Pierre Mercure’s “Kaleidoscope,” Dvorak’s “A Hero’s Song” and Brahm’s Piano Concerto No. 2 in B flat, Op. 83.

Praised as the world’s finest baroque oboist, Marcel Ponseele founded Il Gardellino in 1988 with his musical colleague Jan De Winne, who plays the traverso, and the group has enjoyed recognition as one of the finest baroque ensembles in Europe.

Oct. 10 to 11: Venezuelan-Argentine classical pianist Sergio Tiempo will have his first solo recital in Korea, where he will perform works by Chopin, Liszt, Beethoven and Ginastera.

Oct. 14: Contemporary instrumental musician and composer Yanni is holding his second concert in Korea after his first in 1995. He has accumulated more than 35 platinum and gold albums globally, with sales totaling over 20 million copies.

Yanni’s music became popular through events such as the Olympics and the World Figure Skating Championships, and he received a Grammy nomination for his song “Aria.” The program is drawn primarily from his latest album “Truth of Touch.”

Oct. 6 to 9: Founded in 1978 by the queen of Spain, Ballet Nacional de Espana is a world-class company comprising dozens of talented dancers, singers and musicians. Regarded as ambassadors of Spanish culture, the company does not just do ballet, it also deploys many styles of Spanish dance, with flamenco at the core. At this concert, the company will perform two of its best-loved works.

To Oct. 9: “Rent” is a musical based on Giacomo Puccini’s opera “La Boheme.” It concerns a group of impoverished young artists and musicians as they struggle to make it in New York’s Lower East Side, in bohemian Manhattan, as they deal with issues such as HIV. The production won a Tony Award for best musical.

Sept. 28 to Oct. 31: Founded in 2001, the Seoul Performing Arts Festival is one of Korea’s most prestigious culture and arts festivals, offering works ranging from theater and dance to multimedia and impromptu street performances.

Oct. 1 to 3: The Jarasum International Jazz Festival, which began in 2004, features 50 bands from around the world performing on multiple stages set up throughout the festival site.

Meanwhile, individual jazz artists will compete for a grand prize of 10 million won and the chance to perform at the opening of the 2012 Jarasum International Jazz Festival. There will also be shops displaying and selling art and other items.

To Oct. 30: This festival returns for its fifth year with 30 productions by theaters from nine countries, including France, the Czech Republic and China.

Not be missed is the National Theater of Prague’s “The Makropulos Case.” Written by Czech playwright Karel Capek, the play is directed by Robert Wilson, an avant-garde director, playwright and designer renowned for pushing the theatrical envelope. Another highlight is Comedie Francaise’s “The Imaginary Invalid,” Moliere’s satirical comedy. The festival also features many local productions, including “Mr. Rabbit and the Dragon King” (“Sugungga”), a pansori hybrid. Closing the festival is “Kim Hong-do,” a musical about the legendary Joseon Dynasty painter.