Director displays guts and playfulness in her first outing

Director displays guts and playfulness in her first outing 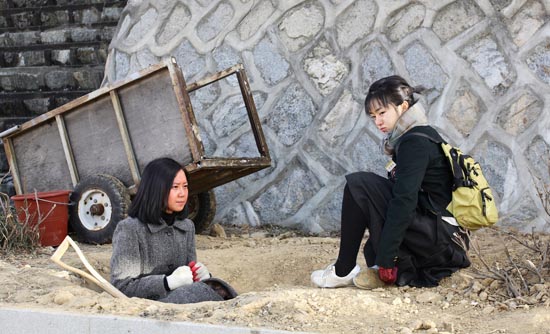 Yang Mi-suk and Jong-hee plot against Lee Yu-ri in a scene from “Crush and Blush” (2008), the first feature-length film by director Lee Gyeong-mi. [JoongAng Ilbo]


The first feature-length film by director Lee Gyeong-mi, “Crush and Blush,” is not your average box-office-conscious debut.

Although the film has its shortcomings - a disorderly tone, a general lack of control in pace and focus as well as a repetitive, lagging ending - this small black comedy about a group of losers is one of those rare films from an up-and-coming auteur that shows both guts and playfulness.

When it first came out, “Crush and Blush” enjoyed a high profile thanks to the involvement of “Old Boy” director Park Chan-wook and because it was Park’s first project as a producer.

Sure enough, we see bits of Park in the film, especially in its focus on a super obsessive, seemingly misanthropic lead character, Yang Mi-suk (Kong Hyo-jin).

Regardless of the reason for its initial recognition, “Crush and Blush” is ultimately a showcase for the talents of lead actress Kong.

She does a brilliant job of portraying Mi-suk, a dowdy, socially-awkward school teacher with a foul temper who wallows in her many complexes while obsessively stalking fellow teacher Seo Jong-chul (Lee Jong-hyeok).

Don’t get her confused with the lovable nerd types in other comedies - this girl is the real deal.

From her unsightly complexion - her face turns bright orange whenever she sees Jong-chul (reflecting the Korean title of the film, “Miss Carrot”) - to her self-delusional, resentful personality, Mi-suk is unattractive and undesirable, any way you look at her.

As her pursuit of her dream man continues, she learns that the married Jong-chul has been fooling around with the pretty, popular, yet insecure Lee Yu-ri (Hwang Woo Seul-hye), a fellow teacher.

Soon enough, Mi-suk teams up with Seo’s daughter Jong-hee (Seo Woo), another outcast, to sabotage Yu-ri. Allegiances between the two women shift back and forth, and likely and unlikely bonds form.

Yu-ri would have been easy to typecast but it is through the twists to her character that the director manages to deliver her own clever insights into the female psyche and the selfishness and self-delusions involved with attraction.

Along with Kong, Seo Woo switches seamlessly from comedy to drama and back to support the delightful quirkiness of the film.

The strange relationship between Mi-suk and Jong-hee is what anchors the movie, as the two women bond and find the attention they’ve been seeking in others, in each other instead.

Through her mission to split up Yu-ri and Jong-chul, Mi-suk’s story, which at first felt like an absurd enigma of sorts, not only entertains but also becomes understandable, even touching, in the end.