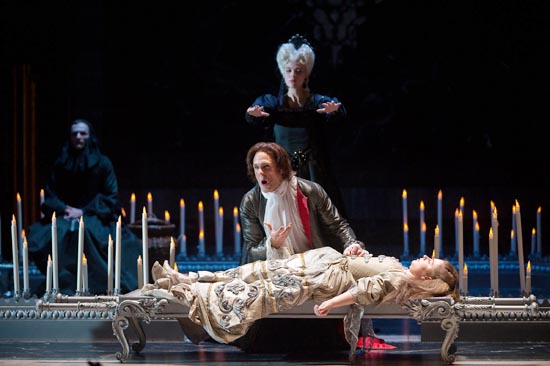 In this Sept. 14 photo released by the Brooklyn Academy of Music, members of Les Arts Florissants and Opera Comique perform a scene from “Atys” conducted at BAM’s Howard Gilman Opera House in New York. [AP/YONHAP]


NEW YORK - It is a courtly spectacle from a bygone age, combining music, dance and lavish costumes to retell a myth of human lovers undone by a vengeful goddess.

It also is a surprisingly modern psychological drama that moves with growing power toward a tragic ending of madness, murder and suicide.

It is “Atys,” an opera composed by Jean-Baptiste Lully in 1676 and now back at the Brooklyn Academy of Music in the same production that first put French Baroque opera on the map in the United States more than 20 years ago.

The elegant performance Sunday afternoon was the first of five this week by the Paris-based group Les Arts Florissants, led by founder William Christie, who conducted the ensemble of period instruments.

It is a long, sometimes leisurely work - a prologue and five acts of four hours with intermissions - but well worth the time and attention of anyone interested in the performing arts.

The opera’s subject, adapted from a story by the Roman poet Ovid, was suggested to Lully and librettist Philippe Quinault by no less than King Louis XIV. Its popularity lasted for a century or so, but it then fell into obscurity until Christie’s group undertook a revival in the 1980s.

The story tells of the handsome young Atys and his love for the nymph Sangaride, whose father has promised her to Celenus, king of Phrygia. Atys in turn attracts the unwanted attentions of the goddess Cybele, a kind of earth mother whose jealousy sparks the denouement. Driven mad, Atys mistakenly kills Sangaride, then realizing his crime he kills himself. A remorseful Cybele turns her dying beloved into a pine tree so that he will remain an object of beauty forever.

Lully set this plot to music of great power and emotional directness, full of subtle harmonies and some unexpected rhythmic variations. Buoyant dances and brooding choruses punctuate a series of arias, duets and ensembles that are seamlessly connected by sung dialogue.

There is a particularly ravishing trio to open Act 4 in which Sangaride, mistakenly thinking Atys no longer loves her, confides in two sympathetic friends.

The highlight of the piece is an extended dream sequence in which Cybele has her spirits inform Atys of her love. Accompanied by an onstage instrumental ensemble, a quartet of male singers serenades the sleeping youth while dancers reinforce the message. Suddenly, a male chorus of Baleful Dreams rushes in to warn in rapid, menacing rhythms of the dire consequences should Atys reject Cybele’s affection.

Director Jean-Marie Villegier has staged this “Atys” in a setting that resembles an ornately decorated room in the royal palace at Versailles. The characters appear in sumptuous period costumes, complete with powdered wigs. He injects some quirky humor into the proceedings, as with the character of Sangaride’s father, who appears as a red-faced drunk, swigging brandy from a bottle.