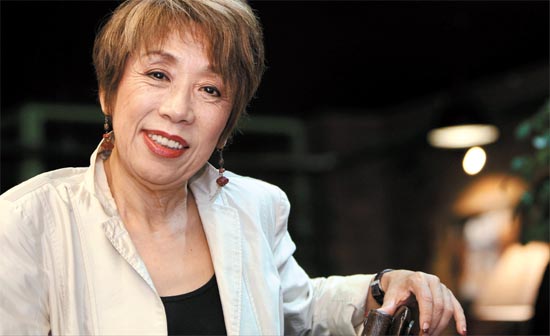 
The movie “Oriume,” which got a belated release in Korea on Wednesday, broke with convention in its native Japan by running at theaters for two years after it debuted in 2002. Testament to its enduring appeal, it is still requested by fans several times a year.

What is even more surprising is the movie’s unusual subject matter: it depicts a family’s struggle to cope with an elderly relative who is afflicted with Alzheimer’s.

Matsui said the film’s snowballing popularity came as something of a shock.

“It was not an instant hit. It started out on just 30 theaters,” she said in Wangsimni, eastern Seoul. “But the audience grew by word of mouth and the film was screened 1,350 times - including community screenings - over two years, with a cumulative audience of 2 million.

“It still plays in Japan three or four times a month.”

“Oriume” has also attracted attention at international film festivals, including in Montreal in 2002 and Shanghai in 2004. 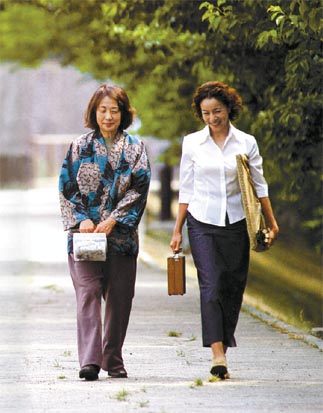 When asked about the secret of the flick’s enduring appeal, the director said, “On the surface, the film talks about Alzheimer’s disease .?.?. but it also touches on the universal theme of accepting someone as they are. The film is about relationships.”

Based on a true story, it depicts the trials and tribulations of Masako and her family as they come to terms with her disease. As the elderly lady becomes increasingly sick, she moves to the city to live with her son and his wife, Tomoe (played by Mieko Harada), who assumes responsibility for caring for her. While the family has to adjust, Masako also enters a new phase of her life by discovering hidden artistic talents.

The director said she was inspired to make the movie when an audience member watching her first film, “Yukie” (1998), handed her a nursing journal.

“It was a detailed account of the woman’s life with her mother-in-law, who was suffering from Alzheimer’s,” said Matsui. “I was surprised by the relationship between the two. They went through so many ups and downs while fighting the disease.”

The journal was later published as a book under the title, “I’m Happy Even If I Forget.”

Matsui said the movie would not have been so successful without its star-studded cast.

“All three leads are famous in Japan .?.?. Yoshiyuki also did a great job. She didn’t just try to imitate people who are fighting Alzheimer’s, but spent a great deal of time trying to understand them [by visiting nursing homes].”

Yoshiyuki is known for her voice-acting skill after playing Grandmother Toki in the hit 2008 animation “Ponyo on the Cliff By the Sea.”

The third big star was Japanese comedian Masa Tommies, who played the son.

Lim Soon-rye, who is in charge of directing a Korean-dubbed version of the movie for older viewers, said there should be a large audience for it here.

“I was surprised to find out that we don’t have any films dealing with Alzheimer’s because it’s such a common disease in Korea.”

Matsui debuted as a filmmaker at the ripe old age of 50 with “Yukie,” a love story about an elderly couple. Before that, she worked as a producer at a TV network, a magazine reporter and a manager for actors.

Despite producing two hits with “Yukie” and “Oriume,” it took another eight years to get her third film - “Leonie” (2010) - made.

“If I were a male director, I probably would have received a proposal for my next film right after ‘Oriume,’ but I didn’t, maybe because I’m a female director,” she told Yonhap News Agency.

“It’s still hard to live as a female director in Japan, but I want to keep making films that can be watched by people for years to come.”

“Oriume” was released here on Wednesday to coincide with World Alzheimer’s Day.