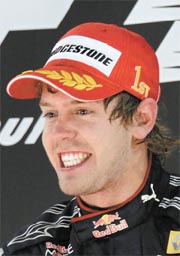 SINGAPORE - Sebastian Vettel snatched last year’s Formula One title with victory in the final race of the season but the German may need only a podium finish in Singapore on Sunday to clinch his second crown with five rounds remaining.

Leading by 112 points after 13 of the 19 races, the 24-year-old Red Bull driver’s coronation as the youngest-ever double world champion looks an inevitable conclusion to a campaign in which he has already enjoyed eight wins.

Vettel can achieve his goal this weekend if he leaves Singapore with a 125-point advantage over his nearest rival, currently Ferrari’s Fernando Alonso, but the German is refusing to claim the title is in the bag.

“Looking to the championship, there is still some way to go. We are in a very strong position, which we deserve because we’ve been working hard and made few mistakes,” Vettel said.

“As long as we come out of the next race with a bigger lead then we start with, then we have done a good job, so let’s see.”

For Vettel to say Red Bull is in a strong position is an understatement given that the team has qualified on pole for every race so far this season and responded brilliantly whenever its main rivals have improved.

Alonso revels in the demands of the 5.073-kilometer (3.15 miles) Marina Bay Circuit, winning the series’ only night race on two of the three previous occasions it has been held, but Vettel intends to improve on last year’s second place.

“The car seems to be very competitive there, so I hope we can go back there this year and win.”

Alonso’s pursuit of Vettel has been a forlorn one since the German won the opening race in Melbourne, but the Spaniard will be hoping to end the season with a strong finish.

“Our aim ... will be to win the race. After practice and qualifying, we will see where we are exactly, he said.

While fighting for race wins, Ferrari already has one eye on next year and is building a better car than the one that took Alonso four races to get on the podium this season.

“Next year we will start again preparing for winter and the season in the best way possible, and try and fight for the world championship,” he said.

The other drivers who are still mathematically in the title chase are Vettel’s Red Bull teammate Mark Webber and the McLaren pair Jenson Button and Lewis Hamilton.

All three have virtually conceded the championship, although they could stop Vettel taking the title on Sunday, and are now locked in a battle for second place.