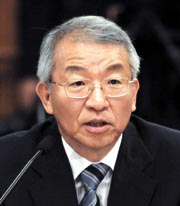 The National Assembly passed an overdue bill to confirm Yang Sung-tae as Supreme Court chief justice in a landslide vote yesterday, after the opposition Democratic Party abandoned its boycott threat at the last minute.

The vote in the 299-member unicameral legislature was attended by 245 lawmakers, 227 of whom voted for the conservative Blue House appointee. Seventeen others voted against Yang, with one member abstaining. Yang, 63, was nominated to the post on Aug. 18.

The DP, which has 87 parliamentary seats, had earlier linked its endorsement of Yang to approval of its nominee for Constitutional Court justice, Jo Yong-hwan, and it threatened to boycott the vote on Yang.

The Grand National Party has taken issue with Jo, a 51-year-old left-leaning human rights lawyer, particularly after his recent remark doubting Seoul’s assertion that North Korea was behind the sinking of the South Korean warship Cheonan in March 2010. The sinking, which killed 46 South Korean soldiers, took inter-Korean relations to their lowest point in years.

After the vote, DP chairman Sohn Hak-kyu said the party’s decision to participate in the vote was a sacrifice for a larger cause. With the passage of the bill, an unprecedented vacuum at the top of the country’s judiciary was avoided. Lee Yong-hoon, incumbent Supreme Court chief justice, is scheduled to step down on Sept. 24.

The chief justice, who serves a single six-year term, makes final decisions on personnel management of the country’s 2,500 judges.

The vacancy in the nine-member Constitutional Court following the retirement of Cho Dae-hyen on July 8 is likely to continue with no schedule set for parliamentary approval of a successor. Sohn urged the GNP to cooperate on Jo’s appointment, saying it would help revive the spirit of bipartisan politics.