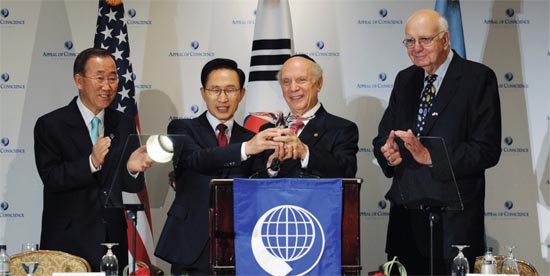 
NEW YORK - President Lee Myung-bak kicked off his five-day trip to the United States at a reception at the swanky Waldorf Astoria to receive the World Statesman Award for his contribution to world peace, democracy and human rights.

In accepting the award, the president, who is here to attend the United Nations General Assembly later this week, took the opportunity to emphasize the imperative of ending North Korea’s nuclear weapons program for lasting peace on the Korean Peninsula.

Presented by the Appeal of Conscience Foundation, which promotes religious freedom and human rights, the award is given annually to a state leader. Lee is the second Korean recipient after President Kim Dae-jung received the recognition in 2001. Prime Minister Manmohan Singh of India was last year’s recipient.

“I hope the 70 million people on the Korean Peninsula will live happily and peacefully,” Lee said in his acceptance speech, which he gave in Korean. “To this end, the most crucial task is removing threats to peace on the peninsula through denuclearization and building mutual trust between the two Koreas.”

The president said economic ties between the two sides should be strengthened to help spur “mutual prosperity” and eventual unification.

“A reunified Korea will be a threat to no country, and it will spur prosperity for our neighbors and contribute to world peace,” Lee said. “I believe my role as president will be laying the groundwork for such a day.”

Lee also promoted South Korea’s long-standing alliance with the United States and vowed that his country would be a good partner of democratic countries around the world.

At the start of his speech, Lee gave a brief message of condolence in English to mark the 10th anniversary of the Sept. 11 attacks.

“Today, it may seem as if we will never enjoy real peace,” Lee said. “However, we must never lose hope.”

The president’s acceptance speech came amid growing signs of a thaw in inter-Korean relations.

The chief nuclear negotiators of the two Koreas met in Beijing yesterday in an effort to reopen the stalled six-party talks, the second round of inter-Korean talks this year.

Later in the evening, the president and the first lady, Kim Yoon-ok, attended a dinner hosted by UN Secretary General Ban Ki-moon and his wife, where the two leaders discussed a wide range of topics, including the Middle East and South Korea’s participation in UN peacekeeping missions and development aid.

On his second day in New York, Lee is scheduled to meet with Klaus Schwab, president of the World Economic Forum, to discuss the global fiscal crisis and measures to promote Lee’s green growth campaign for sustainable development. The Blue House said that Lee would stress the role emerging economies can play in tackling current international problems.

Later in the day, Lee will give a keynote speech at the 66th United Nations General Assembly in which he is to address South Korea’s commitment to pursuing international peace and security, democracy and human rights as well as sustainable development.

In the keynote address, Lee will urge North Korea to give up its nuclear weapons and join the path toward peace and prosperity by becoming a responsible member of the international community, Blue House officials said. In return, Lee will state that South Korea stands ready to help the North.

Reforming the United Nations will also be a major topic of Lee’s speech, as well as promoting the president’s campaign for low-carbon, green growth.