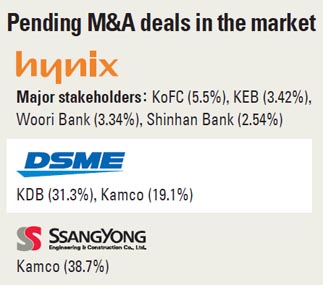 The abrupt move came amid growing concern about the global financial market led by worsening conditions of Europe’s sovereign debt crisis. STX apparently struggled to come up with the estimated 1.5 trillion won ($1.3 billion) needed to see the deal through in order to secure a 15 percent stake in Hynix.

It also came to light that Hynix’ creditors, led by the Korea Finance Corporation and STX, had different views on the selling price and procedure though neither has elaborated on the details of the dispute.

“There is a high probability that the global economic uncertainty triggered by the euro zone debt crisis will last a long time,” STX said in a statement. “Moreover, it would be too burdensome for us to continue investing in the semiconductor sector after the acquisition due to the unsettled state of the world economy.”

The conglomerate had been trying to get funding from a Middle Eastern sovereign wealth fund but kept hitting roadblocks resulting in delays.

With STX Group stepping back and Hynix struggling to find a new owner once again after failing to do so for years, industry experts are painting a gloomy outlook for major mergers and acquisitions in the country.

“Market uncertainty is what companies fear when planning M&As,” said Lee Kyung-soo, a researcher from Shinyoung Investment and Securities. “Though companies have enough liquidity, there is a lot of trepidation about accepting loans and other funding as the market is plunging.”

Several other bids are also faltering, including for Woori Financial and for DSME.

Woori’s bid was recently suspended due to a change of heart from two competing private equity funds, namely TStone Corp. and Vogo Investment.

The different investors initially expressed interest but went cold on the deal due to financing problems from overseas sources and pulled out.

Masterminding the respective sales of Woori, Daewoo and Hynix were among the Lee Myung-bak administration’s top priorities in a bid to retrieve public funds that were used to help ailing companies such as these in the aftermath of the Asian financial crisis in the late 1990s. But a daunting new hurdle has popped up to block the project as the world inches toward another global recession.

Sales of major corporations such as Daewoo and Ssangyong Engineering and Construction have been delayed since 2008, when devastating economic shock waves last raced around world stock markets. Hanwha Group was planning to snap up Daewoo and Dongkuk Steel had designs on Ssangyong, but both gave up the ghost due to funding shortages despite being named preferred bidders.

“M&A activity tends to grow when the stock market booms, while in times of uncertainty companies hold back,”