Making it safe to blow the whistle

Making it safe to blow the whistle 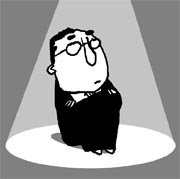 A person who makes allegations about corruption or wrongdoing committed by an organization he belongs to is in essence blowing a whistle for the public good. In reality, however, whistle-blowers are often branded as traitors rather than praised as executors of justice.

Many movies have focused on the troubles that whistle-blowers experience and many are based on true stories. In the 1999 film “The Insider,” Russell Crow stars as Jeffrey Wigand, a former executive of Brown and Williamson. Upon exposing the fact that the company’s tobacco products contained highly addictive and harmful elements, Wigand is threatened and faces a series of problems. The 1983 film “Silkwood” is the story of Karen Silkwood, who died in a suspicious traffic accident after revealing the risk of radiation contamination at a fuel fabrication site in Oklahoma.

Things are not much different in Korean society, where whistle-blowers are often persecuted as traitors. Lee Mun-ok, a former inspector with the Board of Audit and Inspection, was a symbolic figure in the history of whistle-blowers in Korea. He revealed that the BAI suspended its investigation into the taxation of nonbusiness real estate acquisitions by large conglomerates after heavy lobbying in 1990. In return for coming forward, he was jailed and dismissed.

The 2006 book “Apathetic Society” analyzes the psychology and stress of nine whistle-blowers. Five of them were discharged from their jobs and seven experienced extreme mental and physical trauma and were suicidal. One of them actually killed himself.

The Ministry of Employment and Labor recently drafted a regulation on the protection of whistle-blowers that keeps the person’s identity confidential. The ministry’s order is to be enforced this month and is the first such move among the central government agencies. Under the regulation, the person who reveals the identity of the whistle-blower will be reprimanded. If the whistle-blower receives disadvantageous treatment, he will be reinstated or, if necessary, transferred to another position to guarantee confidentiality.

Whether it is in the private or public sector, internal accusations can only be made when whistle-blowers are protected. If a potential whistle-blower is made to feel like a mouse trying to place a bell around a cat’s neck, he will never come forward - and that would be a shame.