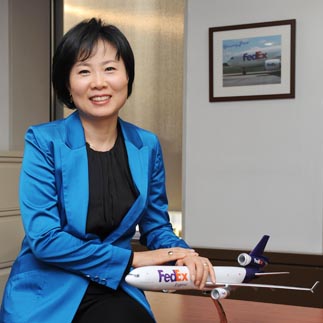 There is something extraordinary about Chae Eun-mi, the 49-year-old CEO of FedEx Korea, which is a subsidiary of FedEx Corporation, the world’s largest express transportation firm. Although she is a high-level executive, Chae knows the name of every one of her 700 employees at the Seoul headquarters and regional offices. She says her efforts are inspired by the company’s management philosophy of prioritizing its people, expressed as “people, service and profit.”

“I started my career at the very bottom, answering up phone calls, so I know how important it is to run a business that focuses on its employees,” Chae said in a recent interview with the JoongAng Ilbo “And it seems as if the employees know that they are being respected and treated well by the management because the turnover rate at our company is relatively low.”

This month marks Chae’s fifth anniversary as the head of FedEx Korea. One of the noticeable changes under her leadership has been the growth in the number of employees. Currently, there are 700 employees working for the company, an increase from 500 five years ago. Her aggressive recruitment strategy has worked well, despite the effects of the United States-led global financial crisis on the business.

Other changes are also noticeable under Chae’s leadership.

Thanks to the increase in employees, FedEx Korea has been able to extend its pickup deadline by three hours nationwide. FedEx employees now pick up packages themselves, instead of going through a middleman as in the past.

Previously, smaller firms in the greater metropolitan area - including Yongin, Hwasung, Icheon and Pocheon, all in Gyeonggi - as well as Haman in the country’s southeastern region, and Jincheon and Eumsung in Chungcheong would pick up packages and deliver them to FedEx. Now the task is performed by FedEx employees.

“Many small- and mid-size firms in the outlying regions do not have exclusive distribution teams,” Chae said. “Our on-site pickup service will help raise SMEs’ competitiveness in the distribution sector.”

FedEx recruited 20 employees to be in charge of that role.

It isn’t the first time, however, that FedEx Korea has introduced a policy change in order to help small firms. In order to support small textile exporters, the company last month introduced an extra-large parcel pack that is double the size of its large pack.

“Many of our clients are textile firms and they have complained to me that they can only pack one sample of jeans in the large-size pack,” Chae said, noting that two pairs of jeans can fit in the extra-large pack.

Ever since starting her current role in 2006, Chae has been in the spotlight as a female chief executive of a foreign firm, which is rare in Korea. Her unique position has meant she is often the featured speaker at government- or industry-organized events.

“At first when I was selected to speak in front of so many people, I was shy,” she said. “But now, I find it a valuable opportunity.”