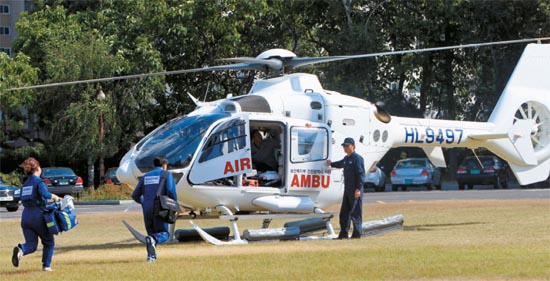 
Island residents with medical emergencies will have a new lifeline beginning today with the start of the country’s first air ambulance service.

The Ministry of Health and Welfare said two helicopters outfitted with medical equipment will be able to depart with a doctor onboard within five minutes of receiving a call. The onboard physician will be able to treat patients during the time it takes to transfer them to a mainland hospital.

The air ambulances will be based at Gacheon University Gil Hospital in Incheon and Mokpo Hankuk Hospital in South Jeolla - close to nearby islands where residents are often isolated from medical care.

“So far, people residing in island regions could not receive such benefits compared to residents on the mainland due to geographical limitations,” said a ministry official.

“We hope the adoption of air ambulances will solve the inconveniences that can sometimes lead to fatal incidents.”

The operation and maintenance of the helicopters will be managed by Korean Air, according to the ministry, adding that it plans to put two more air ambulances into service to cover more areas, including inland regions.

“After thoroughly examining cases of developed countries with air ambulances, such as Germany and Japan, we will gradually expand the number of rendezvous points [for air ambulances],” said the ministry official.