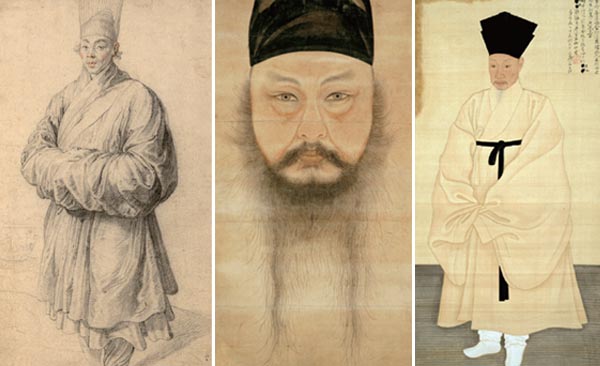 From left: “Korean Man,” painted in 1617 by Peter Paul Rubens, is thought to be of Antonio Corea, believed to be the first Korean in Europe.
A self-portrait by Yun Du-seo (1668-1715), a Joseon-era painter and scholar, is designated as National Treasure No. 240.
“Portrait of Seo Jik-su,” painted in 1796 is a collaborative work by artists Yi Myeong-gi and Kim Hong-do.
All three portraits will be displayed at the National Museum of Korea until Nov. 6. Provided by the National Museum of Korea


Long ago, having a portrait painted was a way of demonstrating power, status or wealth. Portraits can also provide vital clues to a subject’s history, personality or emotional state. Now, two museums in Korea are offering distinctly different views of portraits through two new exhibitions: one that focuses on the history of portraiture and another that attempts to reveal its artistic elements.

The first exhibition is “The Secret of the Joseon Portraits” at the National Museum of Korea in central Seoul, which aims to compare and contrast portraits by Korean and foreign artists. The exhibition, which starts tomorrow and runs through Nov. 6, shows around 200 works, including Peter Paul Rubens’ controversial “Korean Man” (1617).

The second exhibition at the Bukchon Art Museum, “Portrait: The Reflection of the Times,” focuses solely on works by Korean artists. It features about 20 pieces of art by 10 Korean artists and runs through Nov. 20.

Rubens’ “Korean Man” has invited much speculation about the identity of the subject, how he came to the European continent and how he met Rubens. Considered one of Rubens’ most meticulous portraits, “Korean Man” is now owned by the J. Paul Getty Museum in the United States.

The subject is believed to be Antonio Corea. According to some accounts, Corea was a former Korean official who was taken prisoner during the Imjin War (1592-1598) and later sold into slavery. He was then rescued by Italian priest Francesco Carletti, who took him to Florence, where was given an education. Corea eventually moved to Rome, where he met Rubens. In the portrait, Corea is wearing a hanbok, traditional Korean attire. A boat can be seen in the background, which some believe was the artist’s attempt to show that the sitter was a visitor from a distant place. Corea is thought to be the first Korean in Europe, though there is some question as to whether this is true and whether the subject in Rubens painting was Korean at all. 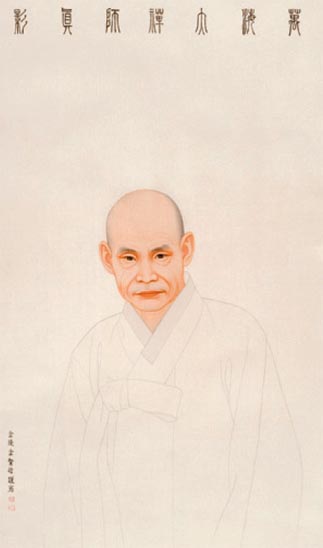 The museum attempts to prove Corea’s Korean roots by showing another portrait of a man in a similar style of dress painted more than 100 years after Rubens’ portrait.

“Portrait of Seo Jik-su” (1796) by Yi Myeong-gi is a painting of Seo Jik-su (1735-?), an aristocrat who spent most of his life painting and reading literature.

In the picture, Seo is shown wearing the dress of a high-class aristocrat of the time - a wide-sleeve, cream color robe with an elegantly-tied knot that gently falls towards the ground. The wider the sleeve of the robe, the higher the social status of the wearer. One unique feature of the portrait is that Seo is shown wearing only beoseon, or socks, a rarity in portraits painted in Joseon period.

The portrait is widely known as a piece by Yi, though it is known that Yi painted only the face and Kim Hong-do, another famous Joseon artist, painted the body.

The exhibition not only presents portraits of historical figures, including Han Yong-un (1879-1944), a Korean reformer who is better known by his pen name Manhae, but modern and abstract paintings as well.

The portrait of Manhae, painted last year by Kim Hyun-cheol, is notable for revealing the small details in Manhae’s face while minimizing the details of his clothes. The all-white background serves to emphasize Manhae’s pursed lips and fixed gaze, and he seems to be looking through the object of his stare. The portrait is so powerful that the viewer cannot help but shrink before it in an attempt to fight back the tense energy it generates.

“In a portrait, the face is transformed into a symbolic mask that has been colored by social and cultural of the time,” Bukchon Art Museum said in a press release about the exhibit. “In this way, a portrait can reveal a person’s thoughts about the social changes taking place during their lifetime.

“The exhibition gives visitors a chance to think about their own thoughts and how those thoughts are reflected in their facial expressions.”

*“The Secret of the Joseon Portraits” starts tomorrow and runs through Nov. 6 at the National Museum of Korea. Admission is free. Hours are from 9 a.m. to 6 p.m. on Tuesdays, Thursdays and Fridays, from 9 a.m. to 9 p.m. on Wednesdays and Saturdays, and from 9 a.m. to 7 p.m. on Sundays and holidays. Children under 6 must be accompanied by an adult. To get to the museum, go to Ichon Station, line No. 4, exit 2. For more information, call (02) 2077-9000 or visit www.museum.go.kr.