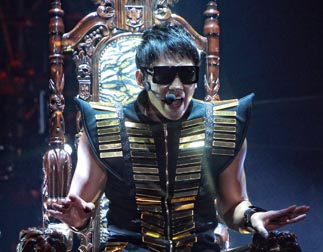 Rain wrapped up his national concert tour before starting his 22-month military service. The 29-year-old is scheduled to join the military on October 11.

Rain will perform one more free concert in Gangnam, southern Seoul, on October 9, but last weekend was the official end of his national concert tour “Rain: The Best Show,” which started in August and ended yesterday at Olympic Gymnasium in eastern Seoul.

“I think joining the military will give me time to look back at myself,” Rain told the press after his concert on Saturday. “[The military] can be physically challenging, but I expect it will make me stronger mentally.”

Rain revealed Friday on his Web site that he would undergo basic training in Uijeongbu, Gyeonggi, but said that it has not yet been determined where he will serve.

The entertainer, who featured in Hollywood films like “Ninja Assassin” (2009) and “Speed Racer” (2008), said after the concert that he hasn’t slept well lately, not because he is about to join the military, but because he is thinking about his post-military future, which could include a greater focus on the American market.

“It was hard for me to be overseas as a man who hadn’t finished his military service,” Rain said. “There were many offers from Hollywood, but I missed lot of opportunities because of my status. Therefore, I think I really need to finish my military service first.”

The singer-actor is expected to unveil a new song before joining the military next month.