Korea shores up defense against UAE with Cho

Korea shores up defense against UAE with Cho 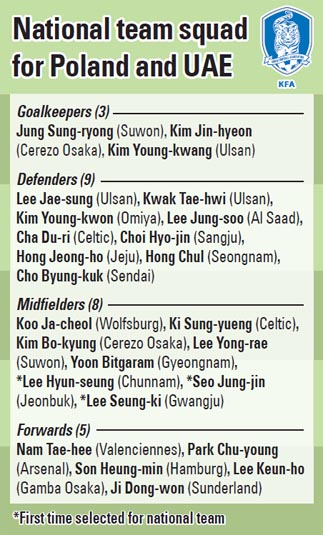 Veteran defender Cho Byung-kuk and three new faces are in the squad for Korea’s matches against Poland and the United Arab Emirates next month.

Korea, led by head coach Cho Kwang-rae, will host Poland on Oct.7 for a friendly before traveling to the UAE on Oct. 11 for the third round of Asian qualifiers for the 2014 World Cup.

There were no major changes in Cho’s 25-man squad compared to previous qualifiers.

The biggest was the calling up of Vegalta Sendai center-back Cho to shore up defense. Cho is playing in Japan and has not donned the national jersey in over three years.

“He offers a more solid defense now than he did when he was in the K-League,” said the coach yesterday.

The former Suwon Samsung Bluewings defender is known for his dominance in the air but was harshly criticized in the past for scoring own goals against archrival Japan. Cho has 11 caps and one goal for Korea.

Choi Hyo-jin, who plays for the K-League’s military team Sangju Sangmu Phoenix, has also been called up to reinforce the back line.

Cho has previously used midfielders like Kim Jae-sung and Cho Young-cheol to fill the right-back positions but he is gambling on the 28-year-old after a six-month layoff from the national side.

“Choi Hyo-jin was out of form when he joined Sangmu ... but now he’s back at his best,” said Cho.

Cha Du-ri of Celtic in the Scottish Premier League is available to serve as a right-back depending on whether he can recover from a hamstring injury in time and the coach said he will decide later between Cha and Choi for next month’s matches.

None of the troika is likely to become a permanent member of the national side just yet, but Cho said they could serve out their apprenticeship as understudies or subs.

“All three players have great technique, which means they can get the ball moving quickly with fast passes,” he said. “I’m not going to make many changes to the starting lineup, but with these guys I think the team will be stronger.”

He said captain Park Chu-young will lead in attack despite not seeing much action with Arsenal in the English Premier League.

“I think our Europe-based players are evaluating their past performances at the qualifiers [and learning from this],” Cho said. “Park will find his form and put on a better show against the UAE.”

Hamburg striker Son Heung-min, who missed the last two qualifiers due to an ankle injury, is also in the squad but Kim Jung-woo, the K-League’s second-top scorer, was ruled out after picking up a knee injury last weekend.

The national team will begin training on Oct.4 at the National Football Center in Paju, Gyeonggi.