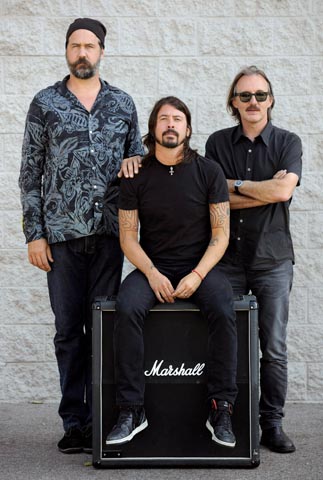 Krist Novoselic, left, and Dave Grohl, center, former members of the band Nirvana, pose with Butch Vig, producer of the band’s landmark 1991 album “Nevermind” in Los Angeles. A 20th anniversary edition of the album is set for release today. [AP/YONHAP]

LOS ANGELES - It’s been 20 years since the release of Nirvana’s “Nevermind.” The album, which included cultural anthems like “Smells Like Teen Spirit” and “Come As You Are,” marked the beginning of the alternative rock explosion of the 1990s and transformed drummer Dave Grohl, bassist Krist Novoselic and singer-guitarist Kurt Cobain into the poster boys of Generation X, until Cobain’s suicide in 1994.

On a recent afternoon inside 606 Studio, the sprawling headquarters for Grohl’s band Foo Fighters, Grohl and Novoselic, while slumped on a couch near the same soundboard that they used to record “Nevermind,” reminisced with producer Butch Vig about how they made the album that forever changed their lives and the music world.

A limited super deluxe edition features rehearsal recordings captured on a boombox (“It was in the bottom of a box of stuff that was gonna get thrown out,” Novoselic recalls) and the original unused “Nevermind” mixes that Vig hoarded until the group began planning for the album’s anniversary last year.


Q. What was your aha moment when you realized that “Nevermind” had become bigger than you?

A. Grohl: I’d say “Saturday Night Live.” Being asked to be on “SNL” was without a doubt that moment for me. That’s when I thought, “Oh my God. We’re one of THOSE bands now.” Then, in the dressing room, that’s when [expletive] “Weird Al” Yankovic calls and asks if he can do a parody of “Smells Like Teen Spirit.” That was a weird weekend. That was it for me.

Novoselic: It was shocking to be famous. I bought a house to deal with it. Then, of course, there was Kurt, who was thrust into being the spokesman of a generation. That was hard for him. He had some personal things going on that were happening just as fast. He was in a whirlwind. Kurt didn’t necessarily identify with Generation X or mainstream values.

What was it like going back and listening to “Nevermind” after all these years?

Vig: It’s still out there. It’s omnipresent, but this is the first time I’ve listened to it from a critical perspective. The remastering sounds great. The album holds up really well. It’s timeless. I think part of that is because the songs are really good. The production isn’t gimmicky. It’s just bass, drums and guitar.

Grohl: “Nevermind” represents more than just an album with music on it to me. It was a specific, exciting time in my life. Personally, my life is split by the release of that album. My entire life is pre-“Nevermind” and post-“Nevermind.” When it came out, my whole [expletive] world was changed forever. There’s something about the innocence of it all.

How do you think music has changed since it was released?

Grohl: Honestly, if you look at what was going on back then, outside of technology, all of that stupid [expletive] that was going on is still going on today. You’ve got stupid shows on TV to make people famous so they can sell records. The top 10 is full of crap. It’s the same [expletive]. You’ve got all these rock bands trying to make it in a van somewhere.

Vig: With information moving so fast, the whole world has ADD. You only grab onto something for a second before you discard it. When “Nevermind” happened, it was still a slower time. That record really took off from a grass-roots level. The label printed something like 40,000 copies. Word of mouth was faster than the Geffen publicity machine could handle.

How do you feel about the impact “Nevermind” had not just on music but on culture?

Grohl: I have this shut-off valve. When I start getting to that place where I consider the impact of the album, I just turn off because it’s hard to imagine something so innocent and simple turning into something that’s out of your hands. I think that album came out at a time when a lot of kids didn’t have anything to believe in and Nivrana was entirely real.

Novoselic: I remember at the time when Nirvana was just breaking and we were still very idealistic about it. We thought, “Yeah, we’re gonna change the world!” It’s like when I first heard punk rock music and even hard rock music, it spoke to me, but then again, revolutions get co-opted, and it never really turns out the way you think it would turn out.

If there was some rip in the space-time continuum, do you think you could have made “Nevermind” today?

Vig: I don’t think it would sound the same. There’s a feel on the record that you can’t really manipulate. These days, I love computers and moving stuff around and [expletive] with the sound. I feel technology would somehow get in the way of the kind of record we made back then. I know it wouldn’t make it better. It’s impossible to imagine that happening now.

Grohl: With technology these days, we could have been one of those bands who recorded it by ourselves in a garage and uploaded it to YouTube and bypassed any of the conventional industry routes. Who knows? I know that if Krist and I went in that booth right now and recorded on that board, we could sound exactly the same. That’s how simple the whole thing was.