A field day for migrant workers

A field day for migrant workers 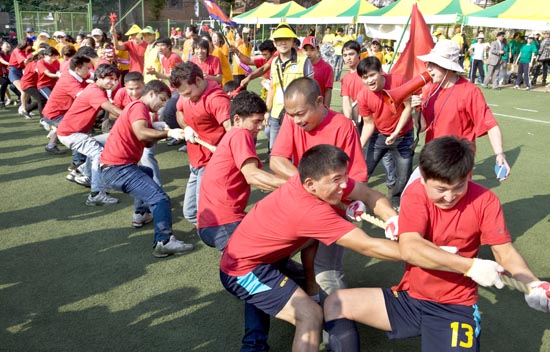 Migrant workers play tug-of-war during a sports day organized by the Seoul Metropolitan Government, in Yeongdeungpo District, southwestern Seoul, on Sunday. The event was attended by approximately 450 migrant workers from 15 countries including the Philippines, Vietnam and China. By Park Sang-moon


Hundreds of migrant workers gathered on Sunday in Yeongdeungpo District, southwestern Seoul, for a sports day organized by the Seoul Metropolitan Government and its seven local Global Migrant Centers. The centers are in Gangdong, Seongbuk, Yangcheon, Eunpyeong, Geumcheon, Seongdong and Yeongdeungpo Districts.

Groups of people from the seven districts in Seoul cheered and beat thundersticks and drums to K-pop performances, while their peers showed off their athletic skills in football, tugs-of-war and relay races.

The field day was attended by approximately 450 migrant workers from 15 countries, including the Philippines, Vietnam, China, Mongolia, Nepal, Indonesia and Kyrgyzstan.

At the opening ceremony, Kang Seon-seup, the director of the Seoul Metropolitan Government’s foreign residents assistance department, welcomed the participants.

In an interview later in the day, he said the event had been organized to encourage participants to develop better interpersonal networks and share information about their respective cultures.

Kang also said that the city government wanted to thank the migrant workers for contributing so much to the Korean economy. He noted that there are about 366,000 migrant workers in Seoul as of the date of the event.

“They are no longer a minority group in our society,” Kang said. “Korean companies are suffering from a lack of workers, especially on the nighttime shift, and many of these migrant workers have filled the spots, which is such a great contribution to the economy.

“Korean enterprises spend billions of won every year in recruiting high quality, experienced workers who are able to speak both English and Korean and they don’t know that most of these workers have finished college in their own countries.”

Kang added, “I decided to organize this event not only because they live tough lives in this country, but I also wanted to thank these people for their great contribution to Korean society.”

Sofonias Paragsa, a 42-year-old worker from the Philippines, said that he had had many experiences working in Asia but that no other country had held an event like this for migrant workers.

“Living overseas is very hard because it is hard to feel a sense of belonging,” Paragsa said. “But I think this is my first time feeling it, as I can see the country actually cares about people like us. The Seoul Metropolitan Government and the Global Migrant Centers have provided diverse learning opportunities for me here.”

Paragsa said that he had learned the Korean language, car mechanics and photography through classes that the Global Migrant Centers offers for free. He also said that he wants to develop a learning center that teaches Korean language and culture to people who want to work in Korea when he goes back to Philippines.

“Most other foreign countries have only asked me to adapt to their countries, but Korea is the only one that has provided several programs for our adaptation,” Paragsa said. “I think that is a huge difference, because it makes me contribute more. I will contribute as much help as I have received while in Korea.”

“I want them to learn as much as they can,” Kang said.

“And I hope they will spread their knowledge and happy memories of Seoul when they go back to their home countries.”