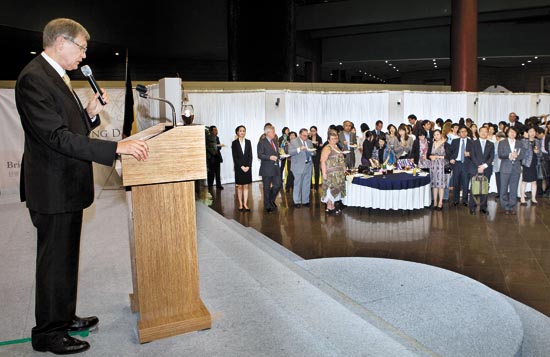 Belgian Ambassador to Korea Pierre Clement Dubuisson, left, delivers his speech at a reception to celebrate the 110 years of diplomatic ties between Korea and Belgium at KBS Hall, Seoul, on Thursday. By Park Sang-moon


Korea and Belgium marked 110 years of diplomatic relations on Thursday with speeches and an orchestra concert sponsored by the Belgian Embassy at KBS Hall.

“The most dramatic demonstration of Belgium’s involvement in Korea was the participation of 3,000 volunteers during the Korean War, and more than 100 people lost their lives,” Pierre Clement Dubuisson, the Belgian ambassador to Korea, said in his keynote speech at the event, which was attended by about 700 people.

The ambassador also highlighted the contributions of Belgians after the Korean War.

“Back in the 1960s and 1970s, a number of Belgians came to Korea to engage in humanitarian actions,” he said. “These young people, driven by their humanity and ideas, have dedicated decades of their lives to alleviate sufferings of disabled and miserable people in Korea.”

In particular, the ambassador mentioned Marie-Helene Brasseur, a Belgian doctor who lives in Siheung-dong, southwestern Seoul. The 65-year-old came to Korea in 1972 as a nurse to treat the poor. She then obtained a doctor’s license from Chung-Ang University in 1985 after finishing Korean medical courses there. Known by her Korean name, Bae Hyeon-jung, she also opened a “Hospice and Palliative Center” in Jeonjinsang clinic four years ago for terminal cancer patients.

“Far from the limelight, she manages to bring comfort everyday to those in the area,” the ambassador commented.

Korea and Belgium established diplomatic ties in 1901, with the Belgian consulate being built in central Seoul two years later. The two-story building is now used as an annex of the Seoul Museum of Art.

“Over decades, political and economic relations between the two countries have developed far beyond expectations,” the ambassador said. “Dozens of delegations visit the two countries every year, but, I like the numerous visits of our Prince Philip to Korea and recent visit of President Lee Myung-bak in Brussels.”

The increasing number of Korean students in Belgium is also notable, the ambassador said, especially those winning prestigious prizes, such as violinist Kang Dong-suk, who won third place at Queen Elisabeth’s International music contest in 1976.

Honoring this history, the Belgian Embassy in Seoul held a concert with the symphony orchestra of KBS, inviting famed conductor Patrick Davin and cellist Didier Poskin.

Kim In-kyu, president of KBS, also expressed his delight at the milestone in his congratulatory speech.

“It’s my wish that there would be more exchanges between Korea and Belgium so that our two countries can continue our mutual friendship,” Kim said.