In $11M playoff, par is enough

In $11M playoff, par is enough 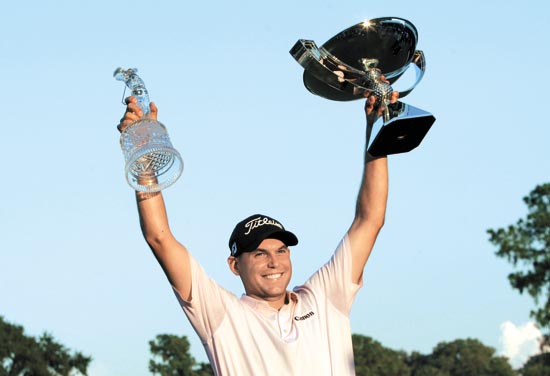 Haas knocked in a four-foot par putt at the third extra hole, the par-three last, to seal victory with Mahan having bogeyed after hitting his tee shot into a greenside bunker and splashing out 15 feet beyond the cup.

The putt earned Haas his third PGA Tour title and a combined total of $11.44 million for winning the richest golf playoff of all time.

“This just worked out for me,” a smiling Haas said greenside at East Lake Golf Club after pumping his right fist in celebration, removing his cap and embracing Mahan.

Asked how he had felt lining up the putt that ultimately sealed victory, he replied: “My hands were shaking. I don’t know how far it was. It looked like 12 feet, it was probably four.

“When I hit it, looked like it came off right where I wanted it to. This is my third win, so it makes all of them so special. This is pretty cool.”

The pair had finished the 72 regulation holes on eight-under-par 272, Haas squandering a three-shot lead with three holes remaining to close with a two-under 68 with joint overnight leader Mahan carding a 71.

British world number one Luke Donald birdied three of the last five holes for a 69 to finish in a tie for third with Korean K.J. Choi (70) and Australian Aaron Baddeley (72).

Several players had a chance of landing the lucrative jackpot going into the final round, with FedEx Cup points leader Webb Simpson and Donald looking the likeliest.

However, Simpson, who would have prevailed over Haas had he finished no worse than 18th on Sunday, ended up 22nd after battling to a 73.

Donald, fourth in the standings at the start of this week, would have claimed the $10 million bonus had he finished alone in third. Joint third was not quite good enough.

Haas, who came into the Tour Championship ranked a lowly 25th in the elite field of 30, ended up sweeping the honors against the odds.

“I don’t know how many times I can say the word fortunate, but if Webb plays a little bit better ... all these things had to happen for me to win, and they did,” he said.

The sudden-death playoff, with $11.4 million on the line for the winner, began at the tricky 18th where both players ended up settling for pars.

Haas missed the green to the right off the tee and then chipped up to 11 feet before coolly sinking his par putt.

Mahan, who found the right greenside bunker with his tee shot, splashed out to six feet before knocking in his putt for a matching par.

At the second extra hole, the par-four 17th, Haas ended up in the right fairway bunker off the tee and appeared to be literally sunk when he pulled his second shot left of the green into the edge of a water hazard.

Mahan, in perfect position off the tee, struck his approach to 25 feet. Remarkably, Haas conjured a stunning third shot with his right foot in water, somehow getting his ball to check on the green and end up just three feet from the cup.

Mahan narrowly missed his birdie attempt and Haas tapped in his par putt to keep the playoff alive.

The duo then returned to the par-three 18th.

Haas pushed his long-range approach putt four feet past the cup and coolly rammed it home to claim his third PGA Tour victory.