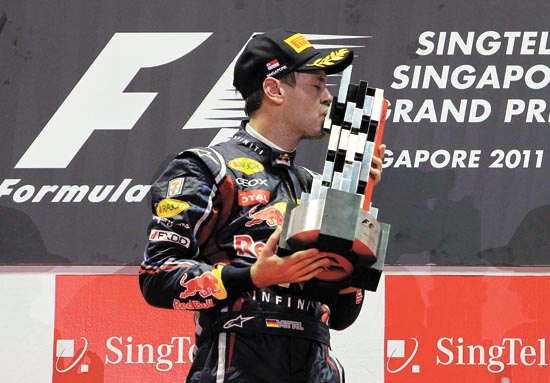 
SINGAPORE - Sebastian Vettel won the Singapore Grand Prix on Sunday but the Red Bull driver will have to wait a little longer to clinch his second Formula One world championship.

The German led throughout from pole position to finish 1.7 seconds ahead of fast-finishing McLaren driver Jenson Button, with Red Bull’s Mark Webber third.

Vettel leads the drivers’ championship by 124 points with five races left and is virtually certain to take back-to-back titles. To prevent that happening, second-placed Button would need to win every race while Vettel fails to gain any points. Vettel has 309 points with Button on 185.

“It was a fantastic race from start to finish,’’ Vettel said. “In the heat we kept our heads cool and it was a perfect day in the office.

“It means a lot to me because I really like this track and it’s one of the hardest challenges we face each year, so it’s nice to come out of that as a winner.’’

Ferrari’s Fernando Alonso finished fourth and McLaren’s Lewis Hamilton was fifth after another incident-filled race for the Briton, who had to serve a pit drive-through penalty for crashing into Ferrari’s Felipe Massa on lap 12.

The incident prompted a furious post-race reaction from Massa, who said the McLaren driver “doesn’t learn anything.’’

Hamilton did not immediately address his clashes with Massa.

“I had fun picking off cars after my penalty, but it was frustrating to once again be down the field,’’ Hamilton said in a statement released by McLaren.

Vettel looked untroubled until the closing stages as Button cut the gap by six seconds in just five laps to get within 3.7 seconds with three laps to go, but the Briton was hampered on his chase by backmarkers.

“I was in control,’’ Vettel said. “We were in a comfortable position for most of the race, which is not easy around here.’’

Button was unimpressed by the lack of awareness of some of the backmarkers, being stuck behind Sauber’s Kamui Kobayashi for more than a lap and then being impeded at a key moment by the two Williams drivers squabbling over 11th place.

“It’s something we need to resolve for the future,’’ Button said. “None of us are stupid, we know if we are being lapped or not.’’

Mercedes’ Michael Schumacher crashed out of the race in spectacular style halfway through, running into the rear of Sergio Perez’s Sauber and launching his car through the air into a barrier. Schumacher was reprimanded by stewards after a post-race hearing into the collision, which the seven-time world champion described as a standard racing incident but which Perez called “too optimistic.’’

“Basically he just lifted off too early and I couldn’t anticipate it,’’ Schumacher said.

“I was about to try and go on the inside as he was a lot slower than myself. Unfortunately, we had a misunderstanding. It was a shame.’’

Japan is the next stop on the F1 circuit on Oct. 9.