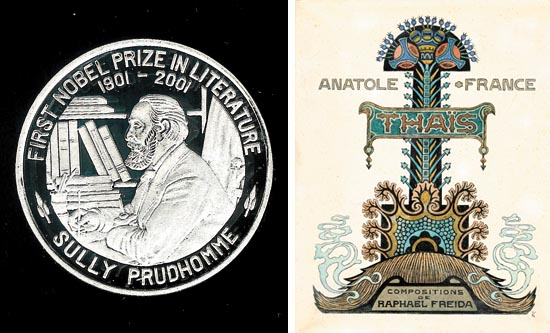 Left:Sully Prudhomme medal A medal issued in the 1970s by France’s mint bureau to commemorate Sully Prudhomme (1839-1907), a French poet and essayist and the winner of the first Nobel Prize in Literature.
Right:‘Thais’ by Anatole France, 1st ed.The cover of the first edition of “Thais”(1924), a novel by Anatole France (1844-1924), a French poet and novelist and the 1921 Nobel laureate.

The trio of fall book festivals, the first of which starts today, has grown in prominence in recent years thanks to increased recognition of Korean literature around the world. Each festival offers events celebrating things literary, from old traditions and Nobel laureates in literature at the Paju Book Sori Festival to the rising popularity of online cartoons at the Wow Book Festival in Seoul and world literature at the Seoul Book Festival at Deoksu Palace.

Left:Hermann Hesse’s glasses Glasses worn in the 1930s by Hermann Hesse (1877-1962), a German-Swiss poet, novelist and painter and the 1946 Nobel laureate.
Right:Hemingway’s typewriter A typewriter with keys for French used by American writer and 1954 Nobel Prize winner Ernest Hemingway (1899-1961) when he was living in Paris.


A trio of festivals

The Paju Book Sori Festival, slated for Oct. 1 to 9 at Paju Book City, north of Seoul, is the nation’s largest book event. Known as the Hay-on-Wye of Korea, after a village in Wales renowned as a book city, Paju has become Korea’s main center of literary art and culture. With more than 1,000 writers and 260 featured publications, this year’s festival is expected to draw more than 100,000 visitors.

One of the main events is a sidebar event commemorating the 110th anniversary of the Nobel Prize for Literature. Through the event, visitors will have a chance to obtain first-edition copies of books by the 107 Nobel laureates in literature from 38 different countries as well as more than 1,000 keepsakes and autographed letters of the laureates.

Among the artifacts on display is a self-portrait of “The Tin Drum” author Gunter Grass and his wife and the glasses and typewriter of “Damian” author Hermann Hesse, the latter of which is one of 6,000 items from Korea’s Hermann Hesse museum.

“It is meaningful to display collectibles showing the life and times of Hermann Hesse,” said Lee Sang-yong, the museum chairman.

The festival also offers a program of music and dance performances, workshops and book sales. For more information, visit www.pajubooksori.org.

Meanwhile, there are two smaller book fairs in the capital. The seventh annual Wow Book Festival kicks off today and runs until Oct. 3 in the parking lot in front of Hongik University. The theme of the event is “Comic World” and the festival kicks off with a seminar called “Proposing a New Comic Book,” in addition to typography exhibitions. There is also a screening of comics and question-and-answer sessions with well-known online cartoon writers. For more information, visit www.wowbookfest.org.

The Seoul Book Festival, now in its fourth year, is scheduled for Oct. 7 to 9. It is a small but popular annual event that takes place in and around Deoksu Palace, central Seoul, a well-trafficked tourist site. The festival puts on display a wide variety of books from different countries by assorted writers, including “Gungeseo” (“At the Palace”). For more information, visit www.seoulbookfestival.co.kr. 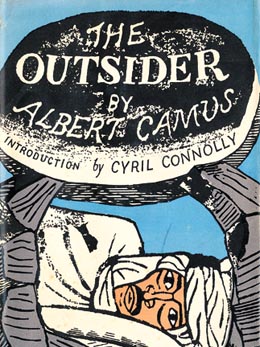 One of the best parts about book fairs is the prospect of meeting well-known writers, and this year’s festivals provide plenty of opportunities to rub shoulders with noted authors.

Swiss writer Alain de Botton, author of “The Art of Travel” (2002) and “The Architecture of Happiness” (2006), will make his first visit to Korea through an appearance at the Wow Book Festival on Oct. 4.

Meanwhile, local authors such as novelist Kim Jin-myung (famous for his 1993 “The Rose of Sharon Blooms Again”) will meet with readers at the Seoul Book Festival. The Paju Book Sori Festival will also welcome prominent writers from Korea and abroad. Richard Booth, 73, from Hay-on-Wye, will attend the festival’s opening ceremony and meet with publishers and writers during the event. The festival also welcomes Korean poet Ko Un and former Culture, Sports and Tourism Minister Lee Eo-ryung, among others.