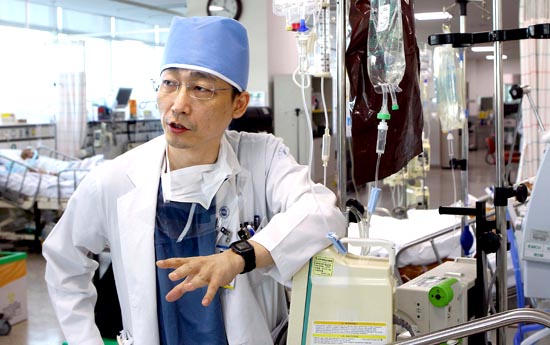 
Dr. Lee Guk-jong, 42, is the trauma specialist renowned for treating Seok Hye-gyun, the captain of the freighter Samho Jewelry, who was shot during a rescue mission after being held by Somali pirates in January.

Lee spent more than six hours in the operating room at Ajou University Hospital in Suwon, Gyeonggi, last Friday, and told us he hadn’t slept that day because he was caring for patients. From 1 a.m. to 4 a.m., Dr. Lee performed surgery on a 49-year-old man whose intestine was ruptured in an auto accident. The man was finally taken to Ajou University Hospital after stopping at small hospitals that didn’t have the resources to handle serious trauma injuries.

In the afternoon, he performed another operation on a patient who had also ruptured his small intestine after falling down a flight of stairs. This patient was also transferred from a small hospital after having been confined there for two days. An infection had developed during his stay at the small hospital.

On Friday, JoongAng Ilbo reporters contacted Dr. Lee for an interview several times, but the answer from the doctor was either “I’m going to perform an operation” or “I’m taking care of a patient.”

Finally, after finishing his afternoon surgery, he was able to make time for the reporting team. The first thing he did was introduce patients in the intensive care unit on the third floor of the emergency medical center.

Twenty beds were occupied by patients, all of whom had been treated by Dr. Lee. The doctor explained the situation of each; when he stopped in front of the man who had languished in a small hospital for a few days, he showed us the patient’s right hand. It had only a thumb.

“He has no family and he had a difficult time before getting treatment in our hospital after moving from hospital to hospital,” Dr. Lee said. “Most patients who come to our hospital are people like him.”

In Korea, where there are no trauma centers, about 30,000 trauma patients die each year because of treatment delays. To solve this problem, Lee has been urging the government to build a trauma center.

The doctor, a Seoul native, has been the iconic face of trauma medicine in Korea. He has so far treated at least 1,300 patients. Since he began to work at Ajou University Hospital in 2002, he has been trying to expand this field, and it looks as if his wish is finally coming true.

The government announced recently that it would draw up detailed plans for creating such centers, perhaps four in all by next year, with more to be added gradually beginning in 2013. All funding will come from the government.

In addition, two medical helicopters, which cost 15 billion won ($13.5 million) each, started operating last Friday, the day that the JoongAng Ilbo met Dr. Lee and asked about his advocacy of such facilities.


Q. It seems you are having a busy day. How’s your work these days?

A. I feel like a construction worker. I sometimes think I should go to a foreign country for five years, but it’s my job.

Why do you think having a trauma center is important?

For trauma patients, it’s very important that they be transported immediately from the scene. But many poor people aren’t able to get surgery in time because they are moved from hospital to hospital. At least for these people, who can’t get proper help from others, we need to have a trauma center.

It looks as if your dream of having a trauma center here is coming true.

Yes, that’s good. It’s meaningful that we’ve bought medical helicopters and started to make a system for trauma care. But the critical point is building a trauma center. The helicopters are important tools that support a center.

Do you think the government’s project is working well so far?

I’m afraid it’s not. I heard that the government is planning to spend 8 billion won on each trauma center, but with that amount we will not have enough equipment in them.

What else in the government’s project needs to be fixed?

For the trauma center to function well, it should be a certain minimum size to allow the center to train trauma specialists and take care of more patients.

How many trauma centers should be built?

As far as I know, the government is considering 15 centers. But if we build small centers, I’m afraid it’s not going to work. We need to first build large facilities in several places and learn through trial and error. After that, we should make a Korean model of trauma centers.

What advice do you have for people working on this project?

Government officials and doctors should not benchmark U.S. and Japanese trauma centers after visits as if they were on a picnic. We can design good trauma centers if officials involved in this project are not thinking about school and hometown ties with other people. This project can only succeed if these people have the mentality to put forth their best effort. If they don’t have that kind of determination, I don’t think they should even start.

What will be critical for this project to get on the right track?

If people make a big mistake on the first step, they will be blamed for wasting money and no one will have the courage to revive the project for 10 years. There should be no repetition of Korean bureaucratic customs like having a big launch ceremony and later paying no attention.