Incheon green, but not with envy, ahead of Jeju

Incheon green, but not with envy, ahead of Jeju 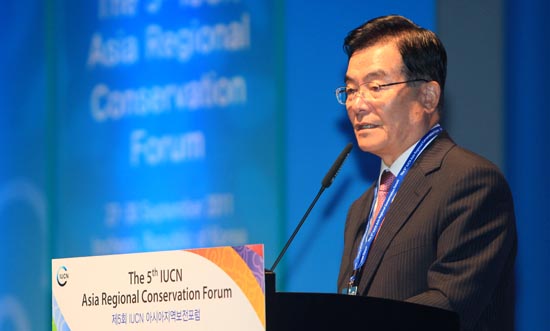 
The 5th Asia Regional Conservation Forum kicked off in Incheon yesterday as a prelude to the ‘Environmental Olympics’ in Jeju next year.

The forum, which wraps up Friday, will touch on a range of issues including ways of valuing and conserving biodiversity, climate change, managing ecosystems to improve food security and conserving the natural environment within the Korean Demilitarized Zone.

The event is organized by the International Union for Conservation of Nature (IUCN). It has brought 600 representatives from 23 Asian countries to the city’s Songdo Convensia Convention Center to discuss environmental projects and promote next year’s World Conservation Congress, which will be held on Korea’s honeymoon isle.

Ten more cities including Washington and Kuwait City have already held, or will soon host, similar regional forums ahead of the grand gathering.

Officials are expecting 10,000 government officials and experts to fly to Jeju next summer to try and hammer out solutions to questions such as what lies beyond the Kyoto Protocol, which ends in 2012, and how to build on the legacy of the Rio Declaration on Environment and Development, which will be 20 years old by then.

“What we are talking about with the congress is a kind of ‘Environment Olympics,’?” said Lee Hong-koo, Chairman of the congress’s organizing committee. “We also expect it to serve as an opportunity to promote Korea around the world,” he added at yesterday’s press conference.

This week’s tune-up event is running under the banner of “Greening Asia’s Growth and Nature” and is being attended by senior government officials from around the world.

They met yesterday for a panel discussion led by Ashok Khosla, the IUCN president, that covered ways of implementing policies for green growth in Asia. Yoo Young-sook, Korea’s minister of environment, Anura Priyadarshana Yapa, Sri Lanka’s environment minister and Tarun Gogoi, India’s chief minister of the state of Assam, were among those present.

Julia Marton-Lefevre, director general of the organizing body, said it still has a crucial role to play.

“The IUCN was created 63 years ago but our mission is still very important,” she said. “It is to influence, encourage and assist societies throughout the world, to conserve the integrity and the diversity of nature and to ensure that any use of natural resources is ecologically sustainable.”

The world’s oldest environment organization has held regular meetings with government officials since 1948. From 1996 it adopted the current name and has hosted meetings in four cities ? Montreal, Amman, Bangkok and Barcelona ? every four years.

Yoo said all eyes will be on Jeju next year. “The Jeju congress will play a pivotal role in promoting the discussion of global environment issues,” Yoon said, noting that it will also mark the 40th anniversary of the first UN Conference on the Human Environment. “It will be an important bridge to enter the post-Kyoto Protocol era.”

For locals, it will also mean the first large-scale international convention to be held on their home turf.

“We are now stepping up efforts to mark Jeju as an ‘environmental capital,’?” said Woo Keun-min, governor of Jeju. “We plan to found a graduate school [there] specializing in environmental studies.”

The island is in contention to be selected as one of the World’s New7Wonders by Unesco in November.