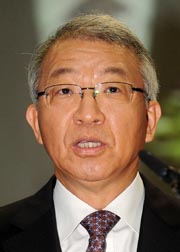 Going against expectations that he will usher in a conservative shift in the nation’s judiciary, Chief Justice Yang Sung-tae, who was confirmed last week by the National Assembly, said yesterday that he would press ahead with reforms in the judiciary to regain the public’s trust.

“It is hard to accept the label that I am a conservative,” Yang said yesterday after his inauguration. “I don’t understand the concept of differentiating between a conservative and a liberal based on one yardstick. When you draw a line, it can create unnecessary hostility.”

The chief justice said that he did not want to be seen as a contrast to his predecessor, Lee Yong-hoon, who was appointed by President Roh Moo-hyun and was considered to be a liberal reformist.

Yang’s nomination by President Lee Myung-bak in August brought speculation that he would soothe friction between the Blue House and the judiciary under the liberal chief justice.

“I have worked with my predecessor for a long time, even before we worked together at the Supreme Court,” Yang said, who was previously a Supreme Court justice before being returning as chief justice. “It is not true that we have fundamental differences. We actually share views on many aspects.”

Yang said he would push forward with efforts to reform the judiciary because it is what the Supreme Court has desired.

“It is not a new initiative by Lee. It is an ongoing reform, and I will continue it,” Yang said.

Asked about the debate over increasing the number of justices on the Supreme Court bench, Yang made his opposition clear.

“As of now, there are 13 judges including the chief justice, and I think that is still too many,” he said. “An increase will worsen the problems in the Supreme Court, which already has a hard time making unanimous rulings.”

In his inauguration speech earlier in the day, Yang said the public’s trust in the judiciary was not satisfactory, urging judges to work on building a transparent, open-minded court system. At the ceremony, the chief justice also vowed to uphold rulings made by lower courts.

“Although it is a basic idea that a trial should end without an appeal, it has become a norm in society to go through all three steps by repeating appeals,” Lee said. “We are facing enormous wastes of human and financial resources.”

Yang also said a serious review was needed in the current judicial system, including trial procedures, the organizational structure of courts and personnel management of judges.

The chief justice makes final decisions on personnel management of the country’s 2,500 judges during his single, six-year term. Yang’s first tasks will be selecting the successors of two Supreme Court justices whose terms end in November and preparing for the National Assembly’s audit, scheduled for next month.