Son longs for father hijacked to the North in 1969

Son longs for father hijacked to the North in 1969 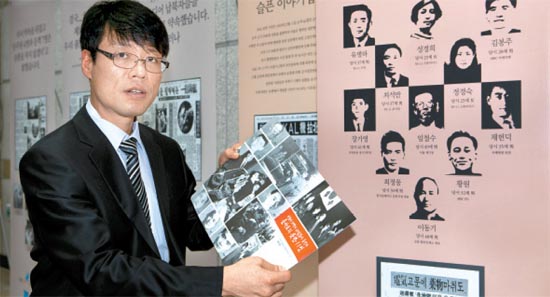 Hwang In-cheol at an exhibition he held yesterday at the northern Gyeonggi Provincial Government Complex in Uijeongbu, Gyeonggi. By Park Sang-moon


On Dec. 12, 1969, a Korean Air Lines YS-11 aircraft flying from Gangneung, Gangwon, to Gimpo International Airport was hijacked by a North Korean spy at 12:36 p.m. and forced to fly to Pyongyang. The flight was carrying 46 South Korean passengers and four crew members, including Hwang Won, a 32-year-old producer for Munhwa Broadcasting Corporation, who was on a business trip.

Hwang left behind his wife, a three-month-old daughter and a two-year-old son. They haven’t seen or heard from him since.

After 42 years, most Koreans have forgotten the hijacking and many young people have never heard about it at all. But Hwang’s son, Hwang In-cheol, 44, has never given up his search for the father he can’t even remember.

And he’s bitter about the scant assistance he’s received through the decades.

“For me, the biggest hardship in searching for my father is people’s indifference and the government’s negligence,” Hwang said. “The South Korean government has done nothing for me, except the formality of asking for help from the International Red Cross.”

Two days after the hijacking, North Korea broadcast a press conference through state-run radio station Pyongyang Broadcasting System. At the conference, the plane’s captain, Yu Byeong-ha, and its first officer, Choe Seok-man, said they had defected to the communist country, shocking South Korea.

But those claims were doubted, and after condemnation from the international community, North Korea said on Feb. 3, 1970, that it would repatriate all of the passengers and crew members and would return the aircraft to the South.

It reneged on parts of that promise. The aircraft was never returned. And on Feb. 14, 39 passengers were sent back to the South through Panmunjom, a village on the inter-Korean border. Eleven people - the captain, first officer, two female flight attendants and seven passengers - were held in North Korea.

“The 39 people who returned told the truth to the public at a press conference on Feb. 15 - it was a hijacking,” Hwang said. “A North Korean agent, Cho Chang-hee, disguised himself as a South Korean passenger and forced the captain to fly to the North after the plane took off.”

According to media reports at the time, the 39 released passengers said they were indoctrinated with North Korean ideology at a series of lectures. They reported that Hwang’s father got into a quarrel with a North Korean official, telling him, “All of the things you are saying are wrong.”

After that, Hwang’s father was dragged outside the classroom and separated from the other South Koreans for the next two weeks.

Another apparent transgression came, according to the passengers who returned, when the group was drinking with North Korean officials and Hwang’s father sang a song, “I want to go back to my hometown.”

“The people who were allowed to return to South Korea said they never saw him again after he sang that song,” Hwang said.

Since her husband disappeared, Hwang’s mother has suffered from poverty and mental illness. Afraid for her son’s safety, she rarely allowed him to enjoy outdoor activities or have normal social interactions.

For the past decade, Hwang has waged a one-man struggle to find his father. (His younger sister lives in Britain.)

He staged a solo rally in front of the National Assembly, sent a letter to North Korea through the Ministry of Unification and issued numerous statements.

The families of the missing passengers and crew formed a lobbying committee in the early days. “The North refused any demand from the committee, saying it was none of their business,” Hwang said.

“The committee was disbanded in 1979 when the group’s president died. Since then, I am the only one who fighting for the truth. And with no solutions, this tragedy has started to disappear from people’s memories.”

One breakthrough came on June 26, 2001, when a reunion for families separated by the Korean War was held in Pyongyang.

Seong Gyeong-hui, a flight attendant on the hijacked plane, met her mother and said she was married to a North Korean man and had a son and a daughter.

She said that the other flight attendant, Jeong Gyeong-suk, was fine, living in her neighborhood.

Except for those two, there has been no word of the others held in North Korea.

“In 2006, North Korea sent me a letter through the Red Cross that said they couldn’t confirm whether my father was alive or not,” Hwang said.

A special law enacted in 2007 says it is the South Korean government’s “duty” to make efforts to confirm the fate of abductees in North Korea and make efforts to bring them home.

Hwang said he once talked to a vice minister of unification at a meeting with families of abductees in North Korea in November 2010.

“The vice minister told me, ‘Currently, [improving] inter-Korean relations is the top priority for the ministry and it is difficult to talk about the matter at this moment.’”

“I know working-level officials in the ministry are doing their best with this issue,” Hwang said.

“However, I was really disappointed with the ministry at the time and thought that humanitarian issues should be separated from the issue of inter-Korean relations. I constantly asked the government for help, but they didn’t listen to me.”

Now Hwang is pinning his hopes on help from the international community. In June 2010, he registered his father as an abductee with the UN Working Group on Enforced or Involuntary Disappearances.

He was the first family member to do so and two other families followed his lead in the next few months.

Last month, the council officially requested that the North confirm whether the 11 abductees are still alive.

According to the UN’s rule, North Korea should reply to the demand within six months. If it refuses, North Korea will be listed by the UN as a country where forced disappearance happens.

“Hijacking is definitely an international crime, which has no statute of limitations,” Hwang said. “Unlike other abductions, North Korea can’t deny this case, because there is so much clear evidence.”

Hwang said that the first thing he wants to know about his father is whether he’s alive.

“If my father died, I want the North to send his remains and tell me everything that happened to him for the past 42 years, according to the international standard,” he said. “If he’s alive, I want to see him regularly, not like reunions in the past, which were one-shot affairs.

“If I could meet him,” Hwang said, “I want to wash his body from head to foot. That’s my dream.”