Projected onto a large screen, Hong’s “Organic Geometry” shows computer graphics developing from a single pixel just like an organism sprouting from a seed. Meanwhile, Han’s media work on two flat-screen display panels shows the movement of the moon reflected in a pool of water in a white porcelain bowl, representing the flow of time.

To Oct. 16: Most of the 100 works by 16 French artists in this show are related to everyday objects, as the participating artists are winners of, or candidates for, the Marcel Duchamp Prize. Duchamp (1887-1968) made a name for himself in France’s avant-garde movement by introducing ready-made products to his works. The prize is sponsored by a group of French collectors called AIDAF.

Of particular interest is Mathieu Mercier’s “Drum and Bass.” It looks like a 3-D version of Dutch abstract painter Piet Mondrian’s famous “Composition” series but is actually made of objects the artist collected from supermarkets.

Another contributor to the show, Celeste Boursier-Mougenot, shows porcelain bowls floating in a pool that produce a mellifluous soundtrack by continually nudging each other.

Laurent Grasso’s video “Projection,” depicts a cloud that appears and charges toward the viewer along a narrow road before filling the whole screen. 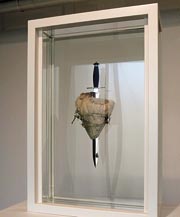 The works are from the collection of Francois Pinault, a major shareholder in Christie’s auction house and founder of business group PPR, which has as subsidiaries luxury fashion brands such as Gucci. 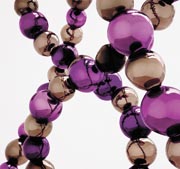 Othoniel is known for his glass works, including a permanent installation at the Palais-Royal Musee du Louvre metro station in the French capital that he designed in 2000 to commemorate the metro’s centenary.

A performance created by artist Yeesockyung, traditional dancer Lee Jeong-hwa and others will be held at 6 p.m. on Oct. 7, Nov. 3 and Dec. 1.