A window on Korean identity in art

A window on Korean identity in art 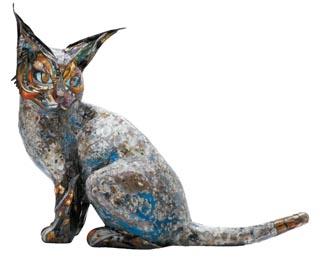 “Money Cat,” a photo collage sculpture by Jang Seung-hyo, is part of “Korea Tomorrow” at the Hangaram in southern Seoul. Provided by the organizer

The third annual “Korea Tomorrow” exhibition, which provides insight into general trends in the local contemporary art scene, is going on until Sunday at Hangaram Art Museum at the Seoul Arts Center in southern Seoul.

This year’s show features more than 200 paintings, sculptures, photos, videos and installations by 42 artists, ranging from the popular Jang Seung-hyo to the emerging artist Kang Yi-yun.

“This exhibition aims to find the identity of Korean contemporary art,” said Lee Dae-hyung, director of the exhibition and president of the curatorial company Hzone.

The exhibition is divided into five sections.

The “WOMAD Code” section shows works by artists who are both women and nomads, in that they work both in Korea and another country. Among them are Dorothy M Yoon’s photos showing Asian models dressed like pale Western dolls against Korean traditional settings.

The “Reconstruction of Korean Beauty” section shows works based on traditional arts and crafts. In one series, Kim Duck-yong uses mother-of-pearl inlay to create figures of women in hanbok, or traditional Korean attire, with colorful skirts that spread out in a circle on square wooden panels.


Meanwhile, the “CounterFAKE” section “deals with the disharmony of the artist’s inner world and his reaction to a false reality,” according to the organizers.

The works on display in the section include a video installation by Kang Yi-yun, whose white screens seem to bulge with vague human shapes, as if someone were hiding behind each of them, but turn out to be video projections.

The “Outsiders Gaze” section shows works whose viewpoints are outside of the mainstream. Among this section is a group of humorous sculptures by Byun Kyung-soo.

In the last section, “Deja-view,” are works dealing with “the coexistence of illusion and memory and works exploring the boundaries of familiarity and unfamiliarity,” according to the organizers. These include photos by Jang Suk-joon showing the gloomy side of cities. His brilliantly-colored photos look pretty at a distance. Up close, however, they are actually images of the gates and walls of dilapidated stores, bars and brothels from around the country.

*The exhibition runs through Sunday at the Hangaram Art Museum at Seoul Art Center in southern Seoul. Hours are from 11 a.m. to 8 p.m. Admission is 10,000 won for adults. Go to Nambu Bus Terminal Station, line No. 3, exit 5, and walk five minutes. For details, visit www.koreatomorrow.org.