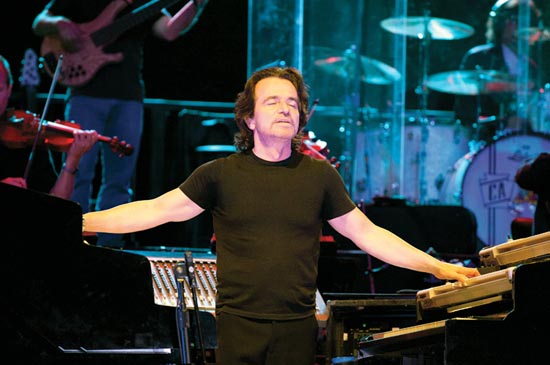 Contemporary instrumental musician and composer Yanni returns for his second concert in Korea on Oct. 14 at the Olympic Park Gymnastics Gymnasium in southeastern Seoul. See MUSIC. Provided by Access Entertainment

Today: For its 660th Subscription Concert, the KBS Symphony Orchestra will play Mercure’s “Kaleidoscope,” Dvorak’s “A Hero’s Song” and Brahms’ Piano Concerto No. 2 in B flat, Op. 83.

Praised as the world’s finest baroque oboist, Marcel Ponseele founded Il Gardellino in 1988 with his musical colleague Jan De Winne, who plays the traverso. The group is recognized as one of the finest baroque ensembles in Europe.

Oct. 10 to 11: Venezuelan-Argentine classical pianist Sergio Tiempo will have his first solo recital in Korea, where he will perform works by Chopin, Liszt, Beethoven and Ginastera.

Oct. 11: This concert is part of LG Arts Center’s series of concerts for office workers who don’t want to be caught in traffic before going home. The guest for the second concert in the series is Jangeun Bae, the winner of a 2007 Korean Music Award for her first album, “The End and Everything After.”

Oct. 14: Contemporary instrumental musician and composer Yanni is holding his second concert in Korea after his first in 1995. He has accumulated more than 35 platinum and gold albums globally, with sales totaling over 20 million copies. He received a Grammy nomination for his song “Aria.” The program is drawn primarily from his latest album “Truth of Touch.”

Oct. 24: Owl City, an American electronic-synthpop project by singer-songwriter and multi-instrumentalist Adam Young, is set to have its first show in Korea. Owl City is known for Young’s magical mix of lively digital rhythms and lush melodies. Young first achieved mainstream success with his 2009 major label debut “Ocean Eyes,” which spawned the quadruple-platinum hit single “Fireflies” and the lesser hit “Vanilla Twilight.” Young released a third album, “All Things Bright and Beautiful,” in June, which went to No. 1 on the iTunes American album chart in its first week.

Oct. 26: English rock band Whitesnake comes to Seoul for its first gig. The concert will promote the band’s latest album, “Forevermore,” which was released in March. At this concert, the band will perform its most successful hit singles such as “Here I Go Again,” “Is This Love” and “Don’t Break My Heart Again,” as well as the first single from the new album, “Love Will Set You Free.”

Son was named Kumho Musician of the Year by the Kumho Asiana Cultural Foundation in 2005. She has since performed with some of the world’s best orchestras, including the Israel, Warsaw, Tokyo and Czech Philharmonics, the Jerusalem and NHK Symphonies, as well as with the Seoul Philharmonic, KBS Symphony Orchestra and every other major orchestra in Korea.

To Friday: This Korean musical revolves around Seo Yoo-ra, who works at a cable broadcasting station and is dispatched to New York by her boss. Once there, Seo meets up with an old flame, Yoo Tae-min, who has established himself as a world-famous choreographer. As the plot thickens, Yoo’s friend David jumps into the fray and the musical explores the developing relationships among the three.

Friday to Saturday: British choreographer Akram Khan returns to Korea with a cast of dancers from Asia, Europe and the Middle East. Drawing inspiration from myths about angels and the idea of “ascension,” Khan takes us on an exploration of the “Vertical Road” that exists between heaven and earth while criticizing the high-velocity nature of life in the digital age.

To Oct. 9: “Rent” is a musical based on Giacomo Puccini’s opera “La Boheme.” It concerns a group of impoverished young artists and musicians as they struggle to make it in New York’s Lower East Side, in bohemian Manhattan, as they deal with issues such as HIV. The production won a Tony Award for best musical and much critical acclaim upon its premiere.

Vesturport and Gardarsson last appeared in Korea in 2008 with a memorable performance of Kafka’s “Metamorphosis.”

The leading roles will be performed by three divas of the Korean musical theater - Park Hae-mi, Insooni, and Hong Ji-min - and the Korean cast and crew will be supported by the musical’s original production team.

Today to Oct. 16: SI Dance offers up an extravaganza of traditional and contemporary dance from East and West by local and foreign troupes. Featured this year are Tanzcompagnie Oldenburg Nr. 8, Shin Eun-ju & Masayuki Sumi and Glims & Gloms Dance Company. Also included are the Korean Identity through Dance series for emerging choreographers and the China·Ghana·Korea·Sri Lanka/Asia-Africa Dance Exchange project. Dancing City continues the festival’s tradition of increasing access to the arts through free site-specific performances.

To Oct. 30: This festival returns for its fifth year with 30 productions by theaters from nine countries. Not be missed is the National Theater of Prague’s “The Makropulos Case.” Written by Czech playwright Karel Capek, the play is directed by Robert Wilson, an avant-garde artist renowned for pushing the theatrical envelope. Another highlight is Comedie Francaise’s “The Imaginary Invalid,” Moliere’s satirical comedy. The festival also features many local productions, including “Kim Hong-do,” a musical about the legendary Joseon Dynasty painter.