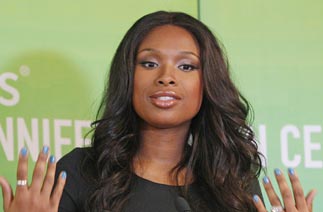 CHICAGO - Jennifer Hudson’s name has graced an Oscar and a Grammy, but the Chicago native said she never imagined her name would be on a weight loss center.

The singer and actress stopped in her hometown Tuesday for the opening of the Weight Watchers Jennifer Hudson Center. Hudson, who lost about 80 pounds, is a spokeswoman for the company.

The new center, where walls are covered with posters of the svelte star, is in a strip mall in Chicago’s South Side, not far from President Barack Obama’s home.

“I never thought I would make it to have my own center,’’ said Hudson, who wore a fitted, ruffled black dress and high-heeled studded black boots. “I’m so honored to be here and see this day.’’

Weight Watchers had pledged to donate a portion of the center’s revenue to a foundation that Hudson co-founded in honor of her late nephew, Julian King.

The body of the 7-year-old was found in a vehicle a few days after Hudson’s mother, Darnell Hudson Donerson, and brother, Jason Hudson, were found dead in the family’s Chicago home in October 2008. All three had been shot. The estranged husband of Hudson’s sister is charged in the killings and is awaiting trial.

Hudson, who started the foundation in Julian’s honor with her sister, Julia, said she was inspired as a child by seeing the success of others.

“I love to target children, because that’s the thing that makes a difference,’’ Hudson said. “We hope to do the same thing and start here at home in Chicago with health, with education, with dreams.’’

Hudson, who first earned fame as an “American Idol’’ finalist, won a Grammy for her self-titled album and an Oscar for her role in “Dreamgirls.’’ Her album “I Remember Me,’’ came out this year.