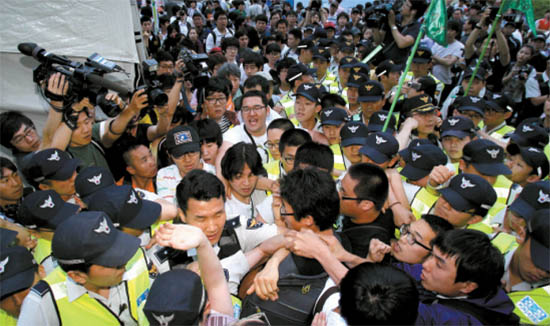 In June, thousands of college students in Cheonggye Plaza, central Seoul, protest for tuition fees to be decreased by half. By Kim Tae-seong


Partying and boys seemed to be the last thing on 20-year-old Kim Su-bin’s mind.

On a recent afternoon at a cafe in front of her school, the prestigious Ewha Womans University in northern Seoul, Kim looked drained as she said: “Never mind a boyfriend - I’m just busy trying to survive my brutal schedule from day to day.”

Wearing a pair of black-rimmed glasses, a disheveled bun and not a speck of makeup, the college sophomore said she had just one hour before she had to go in for a job interview at a law firm, where she was hoping to work part-time as an intern.

With tuition around 4 million won ($3,396) per semester, Kim is currently paying for her education through a student loan. After four years at Ewha, even before she steps foot into the job market, she will have accumulated at least 32 million won in debt that she will have to start paying off as soon as she gets a full-time job. Last semester, Kim took a temporary leave of absence from school to earn extra money.

On most weekdays, the college sophomore said she comes home at two in the morning, and she works full days on weekends.

“During my first semester as a freshman, I taught one to two private lessons a day, translated documents and did other such odd jobs here and there on top of my classes at Ewha, just to make ends meet,” she said.

Kim, an international relations major, shrugged off questions when asked about her dreams.

“I don’t know,” she said with a weary smile. “When I was younger, I wanted to work for an international organization as a representative of Korea, but after all this, I’ll probably work for whichever company offers me the highest salary, so I can pay off my student loans as fast as possible.

“I know I’m young, but I feel trapped and restless.”

College tuition in Korea - No. 2 in the world 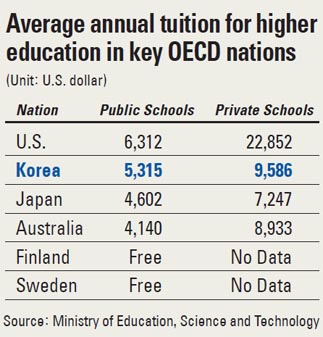 College students in Korea have a long history of protesting for lower tuition rates, but looking at a recent OECD report, their fight appears more valid than ever before.

According to the report by the Organization for Economic Cooperation and Development, Koreans spend the second most on higher education among citizens of OECD member nations, behind the United States. The average tuition that Korean students pay per year for higher education was tallied at $5,315 for public institutions and $9,586 for independent private institutions.

And the report suggests that when taking into account the comparatively low amount of government subsidies that go to schools to ease the financial burden on students, Korean students are actually exposed to higher tuition rates than American students, on average.

“[The data] suggests that although Korea has the second-highest annual tuition fees after the U.S. with available data, the proportion of tertiary students who pay high tuition fees is greater in Korea than in the U.S.,” the report stated.

Tuition rate hikes at Korean universities over the last 10 years have far exceeded the rise in consumer prices for the same period. According to a report by the Ministry of Education, Science and Technology, the average tuition at state-run schools climbed from 2.4 million won a year in 2001 to 4.4 million won last year, an increase of 82.7 percent. At private universities, tuition rose 57.1 percent during the same time frame, from 4.8 million won in 2001 to 7.5 million won last year. Meanwhile, consumer prices rose by 31.5 percent during the same period.

The cost of college tuition began rising rapidly after the central government granted universities administrative autonomy, giving schools the right to raise their fees - first to private universities in 1989 and then to state-run universities in 2003.

Ban Sang-jin, a professor of education at Chonbuk National University who spoke at the National Assembly in June on a proposal to reduce college tuition by half, said the autonomy policy created another problem for Korea, where more students go to private schools and receive less financial aid than in other countries.

“Since the administrative autonomy policy went into effect in 1989, Korean schools have blindly followed the model of American schools, even though we are a much smaller and very different type of economy than the U.S.’,” Ban said. “In many other developed countries, especially in Europe, higher education is seen as a national issue, whereas in Korea it is considered a private one, which is why there are fewer public subsidies for college students in Korea.”

High tuition does not translate to better education 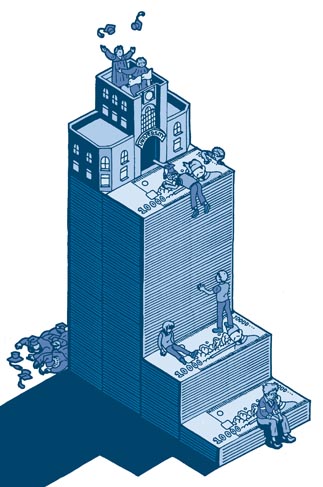 This year, student protests for lower tuition rates grew more heated than ever before. Along with Korea University students in April, thousands of students from major universities in the capital, including Ewha, Sogang University and Kyunghee University, gathered together and urged their schools to implement emergency measures to lower the financial burden on students.

In April, around 2,000 students from Ewha refused to attend chapel class, a mandatory subject for graduation, in protest. Earlier in March, 1,000 students at Sogang gathered for a large student body meeting - the first at the school in 22 years - to urge the school to freeze tuition costs.

Koreans often refer to these annual tuition-related rallies as “forsythia protests” referring to the fact that the demonstrations traditionally occur in March and April, when forsythia flowers blossom only to wither within a month or so.

This year, however, the protests got bigger by the month, with a massive candlelight vigil in June where thousands of students and civic groups pleaded for tuition to be reduced by half.

For most students, the frustration lies in the fact that the high tuition rates are not translating to a better education.

“Even though the number of college students increases each year, universities are not hiring more professors,” said Cho Yong-sool, head of the student organization Youth Association 36.5. “Instead, they hire more part-time lecturers to fill the classes. A lot of these lecturers are not committed to their teaching jobs, and who can blame them? They are paid extremely low fees by universities.”

No jobs, nowhere to go

Cho argued that university students are now in a sticky situation - they cannot afford to graduate, and even if they do, it is hard to get hired.

“Honestly, the tuition war is only one of the problems young people face,” he said. “Since the global financial crisis of 2008, even students who graduate from top universities have difficulty securing a full-time job, not to mention students from smaller colleges.”

Cho illustrated the students’ plight with this example: “One of our Youth Association 36.5 executive committee members is a senior studying philosophy at a university. He has one semester to go but can’t pay the tuition and is having a difficult time getting a job with a liberal arts background. I really don’t know how to help him.”

Statistics Korea puts the rate of unemployment for those aged 15 to 29 at 7.3 percent as of this May, a 0.9 percent rise from last year. According to the statistics office, it takes at least 11 months for a college graduate to find a first job, which is one month longer, on average, than the previous year.

In order to delay graduation so that they can prepare for employment and earn money to pay off their tuition, more students are taking leaves of absence from university.

A senior at Hanyang University, who declined to be named, said he took four semesters off from school, working at various odd jobs including at convenience stores and cafes to delay graduation.

“I should have graduated in 2009 but instead I’m working at a convenience store to pay off my tuition and doing nonpaying internships to boost my resume,” he said.

“As a student from a good university, I feel ashamed to be working at a convenience store, but at the same time, it’s better than graduating with debt and no place to go.”

In trying to resolve the tuition issue, the government announced earlier this month that it will invest 2.25 trillion won next year into the higher education sector and reduce the average cost of tuition by 5 percent. But student groups and civic organizations argue that a 5 percent reduction is not nearly enough to fix the problem.

Kim Ji-eun, a head counselor at Seoul National University’s Center for Campus Life and Culture, warned that the rising cost of tuition could result in a bitter socioeconomic divide between students.

“As the cost of tuition gets more expensive, the divide between rich and poor students becomes more distinct,” she said. “This could result in an irreversible spiritual divide between them, as well.”

For Kim Sei-hee, another sophomore at Ewha, the divide is between the “politically-charged” protestors, who she said are taking the issue to a political extreme, and regular students like herself, who want “a realistic solution to the problem.”

“The Korea College Students’ Union and other left-wing civic groups have been the voice of this tuition war, but I fear that their involvement will only make matters worse,” she said.

“First, I think individual schools must be responsible for how they manage their money so that tuition goes to improving educational standards instead of building fancy new buildings on campus and other useless expenses like that,” she said.

Ban, the Chonbuk University professor, agreed that a sensible allocation of money by schools and an increase in higher education subsidies from the government are crucial in addressing these concerns.

“Even though the Korean economy is emerging as one of the biggest in Asia and in the world, its investment in higher education is almost humiliating,” he said. “It’s quite ironic considering how much of Korea’s economic growth is indebted to the development of higher education.”

For busy sophomore Kim Su-bin however, it seems these government declarations and candlelight vigils are nothing but another news story.

“It’s just words and a bit of media attention. I have a loan to pay off and a brother to support. I have no time for that,” she said as she got ready to leave for her internship interview at the law firm.